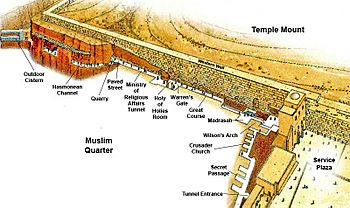 Western Wall Tunnel are underground tunnel from different periods in history from the Western Wall to the Jewish Quarter under the Old City of Jerusalem. The complex of buildings from both medieval and modern era. Walking horizontal axis connects the chambers and tunnels, gives the visitor an experience of a journey along the historical timeline, and is considered one of the most popular tourist destinations in Israel.

All content from Kiddle encyclopedia articles (including the article images and facts) can be freely used under Attribution-ShareAlike license, unless stated otherwise. Cite this article:
Western Wall Tunnel Facts for Kids. Kiddle Encyclopedia.