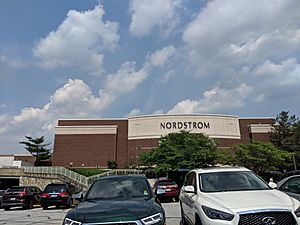 The mall opened in March 1968, with three anchor stores and 58 smaller shops. It was built as a joint venture between The May Department Stores Company and Strouse, Greenberg & Co., based on the design of John Graham, Jr. and Ward and Hall. The original anchors were Hecht's, Garfinckel's, and Sears. Smaller shops included a Bond Stores outlet. The Mall was also where longtime fugitive William Bradford Bishop bought a ball peen hammer and gas can to allegedly kill and burn his entire family on March 1, 1976. The old mall logo was an owl-shaped "M". A mid-1970s expansion included a US$4.5 million, 155,000-square-foot (14,400 m2) Woodward & Lothrop store and 60,000 square feet (5,600 m2) of additional retail space for 40 stores.

The renovation completed in October 1991 included new floors, brass railings, glass elevator, which was removed in 2013, and removal of all the fountains to allow for more kiosk and seating space. The grand re-opening featured a concert by Tony Bennett. An expansion wing featured the first Nordstrom in Maryland and the third in the Washington, D.C. metropolitan area, and Crate & Barrel. The Boulevard Cafes food court is located on the second level.

In 2018, Westfield proposed a plan to transform the Sears store and surrounding areas into an open-air mixed-use center.

All content from Kiddle encyclopedia articles (including the article images and facts) can be freely used under Attribution-ShareAlike license, unless stated otherwise. Cite this article:
Westfield Montgomery Facts for Kids. Kiddle Encyclopedia.