Kids Encyclopedia Facts
This page is about the Book-Cadillac Hotel. For the "Book Tower" in Detroit, Michigan, see Book Tower.

The Westin Book Cadillac Detroit is a historic skyscraper hotel located at 1114 Washington Boulevard in Downtown Detroit, Michigan, within the Washington Boulevard Historic District. Designed in the Neo-Renaissance style, and constructed as the Book-Cadillac, it is part of Westin Hotels and embodies Neo-Classical elements and building sculpture, incorporating brick and limestone. Among its notable features are the sculptures of notable figures from Detroit's history—General Anthony Wayne, Antoine Laumet de La Mothe, sieur de Cadillac, Chief Pontiac, and Robert Navarre along the ornate Michigan Avenue façade and copper-covered roof elements. The flagship hotel is 349 ft (106 m) tall with 31 floors, and includes 65 exclusive luxury condominiums and penthouses on the top eight floors. It reopened in October 2008 after completing a $200-million reconstruction project and contains the Roast restaurant and 24 Grille. 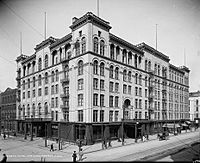 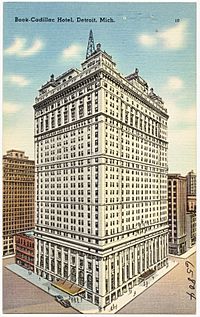 The Book Cadillac Hotel in an old postcard

The hotel was developed by the Book Brothers—J. Burgess, Frank, and Herbert. The brothers sought to turn Detroit's Washington Boulevard into the "Fifth Avenue of the West." Part of that vision was the creation of a flagship luxury hotel to compete against the Detroit Statler Hotel three blocks to the north. They commissioned architect Louis Kamper, who designed their Book Building in 1917, to design the building. In 1917, the brothers bought the old Cadillac Hotel at the northeast corner of Michigan and Washington Blvd., but World War I material shortages delayed the start of work on their new hotel. Construction finally began in 1923, and the building, which bore part of the name of the old structure, was the tallest in the city and the tallest hotel in the world when it opened in December 1924.

The hotel cost $14 million to build and contained 1,136 guest rooms. Public spaces on the first five floors included three dining rooms, three ballrooms, a spacious lobby, and a ground floor retail arcade. On the hotel's top floor was radio station WCX, the predecessor to WJR. The hotel operated successfully until the Great Depression, when banks foreclosed and the Book brothers lost control in 1931. For much of the period after the Books lost ownership, the hotel was run by hotel industry pioneer Ralph Hitz's National Hotel Management Company.

On May 2, 1939, a meeting took place in the hotel lobby between New York Yankees first baseman Lou Gehrig and team manager Joe McCarthy in which Gehrig told McCarthy to leave him out of the starting line-up from that day's game, ending his 2,130 consecutive games streak.

In 1951, Sheraton bought the hotel, renamed it the Sheraton-Cadillac Hotel, and undertook massive renovations. All public spaces except the ballrooms and Italian Garden were redone and escalators replaced the grand staircase. In 1975, with business declining and the hotel in need of another renovation, Sheraton sold the building to Herbert R. Weissberg and it became the Detroit-Cadillac Hotel. Ownership changed again in 1976, and it became the Radisson-Cadillac Hotel. In 1979 the Radisson chain sold the property, and it became the Book-Cadillac once again. Though it had been considered the city's top hotel for many years, the owners announced that the hotel would close due to declining occupancy. The city of Detroit, scheduled to host the 1980 Republican National Convention, did not want to face the prospect of losing more downtown hotel space, so in late 1979 the city entered into a partnership through the Detroit Economic Growth Corporation with the owners to keep the hotel open.

By 1983, it was decided that the only way to bring the hotel back to profitability was to convert it into a mixed-use property. The hotel's 1100 rooms were deemed too numerous to fill and were too small by modern standards. The plan would turn the building into the Book-Cadillac Plaza, a 12 floor, 550-room hotel and 11 floors of office space. The hotel closed its doors in October 1984 for the renovation, but those plans were quickly dashed as proposed construction cost soared, and Detroit's economic situation continued to deteriorate. For the next two years developers came and went. But with no one able to take on the increasingly complex renovation, in 1986 the contents were liquidated. After the sale, the hotel's retail tenants who had planned to stay through the renovation moved out and the building was shuttered, a state in which it would remain for the next 20 years. Time passed and the unmaintained property fell victim to time, the elements, vandalism, and urban scavengers. 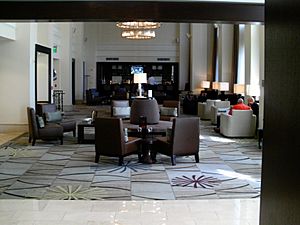 In July 2003, after years of legal battles to fully acquire the building and to find a developer, the city of Detroit announced a $150 million renovation deal with Historic Hospitality Investments a subsidiary of Kimberly-Clark to turn the building into a Renaissance Hotel. Work started shortly after the announcement but came to a halt in November when construction crews discovered more damage than anticipated. The associated cost overrun caused Kimberly-Clark to back out of the deal. A new renovation plan through the Cleveland-based Ferchill Group was announced in June 2006, with the Book-Cadillac to become a Westin Hotel and Residences. Kaczmar Architects Inc. of Cleveland and interior design firm ForrestPerkins of Dallas completed design and historic renovation work on the project from August 2006 through to completion in the fall of 2008, with a grand opening celebration held on October 25, 2008.

Architect Louis Kamper designed the hotel in the Renaissance Revival style at the corner of Washington Boulevard and Michigan Avenue. Abutting the hotel on the north was the headquarters of the Detroit Edison Company. The structure is a steel skeleton faced with beige brick and limestone accents. 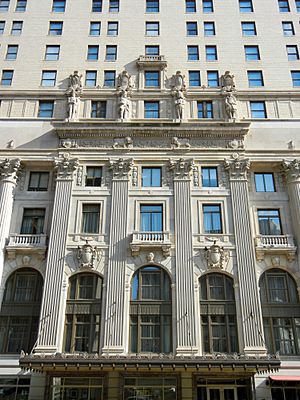 Detail of the Michigan Avenue façade

The lower six floors are clad in limestone. On the ground floor it is carved into wide horizontal bands while floors two through five are smooth. Corinthian pilasters and columns separate the windows of the public rooms from the second to fifth floors with windows for the second and third floors contained in large arches. Windows on the fourth floor are framed by small balconies. Above the sixth floor, the exterior is beige brick with cornices at floors 7, 16 and 21. Ionic columns frame windows on floors 23 through 25. A large cornice encircled the 27th floor and was removed during an earlier renovation.

Limestone quoins accent three corners of the building which are capped with copper-clad ziggurats. The north and south sides have penthouse towers that extend to the 31st floor. When the north penthouse was reconstructed, it was built 18 ft (5.5 m) shorter to make the zigurrats the highest points of the building. The building sits atop three basements, which contain some inoperable mechanical equipment too large to remove during renovation.

On June 27, 2006, the Ferchill Group agreed to renovate the structure into a mixed-use hotel and condominium building including a 453-room Westin Hotel, and 65 condominium units priced above $280,000. ForrestPerkins completed interior designs for the project which cost $176 million and was completed in fall 2008. As part of the renovation some of the original decor of the Grand Ballroom (renamed the Venetian Ballroom) and Italian Garden was recreated. A three-story addition containing a new 11,000-square-foot (1,000 m2) ballroom, pool, hot-tub, fitness center, spa, and additional conference space was built north of the hotel on the site previously occupied by the Detroit Edison Headquarters.

Across Shelby Street from the hotel, the Peoples' Outfitting building, also known as the Detroit Commerce Building, was demolished and replaced with a 10-story parking garage for hotel guests and residents. In 2017, apartments were built above the parking garage.

All content from Kiddle encyclopedia articles (including the article images and facts) can be freely used under Attribution-ShareAlike license, unless stated otherwise. Cite this article:
Westin Book Cadillac Hotel Facts for Kids. Kiddle Encyclopedia.