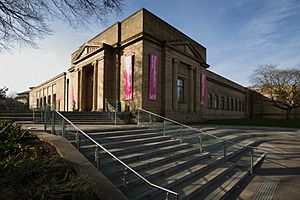 Weston Park Museum is a museum in Sheffield, South Yorkshire, England. It is one mile west of Sheffield city centre within Weston Park. It is Sheffield's largest museum and is housed in a Grade II* listed building and managed by Museums Sheffield. Until 2006 it was called Sheffield City Museum and Mappin Art Gallery.

The museum opened in 1875 in Weston House, whose grounds later became the park. A neoclassical extension, in the Ionic order, was added in 1887. The Mappin Art Gallery was built to house the collection of work bequeathed to the city by the Rotherham businessman John Newton Mappin. Weston Hall was demolished in the 1930s and a purpose-built structure, adjoining the Mappin Art Gallery, and funded in part by donations from local businessman J. G. Graves, was completed in 1937.

The two buildings closed in March 2003 for complete renovation. The £17.3 million re-development was partly funded by the Heritage Lottery Fund, Sheffield City Council and Objective 1 for South Yorkshire. The building reopened in October 2006 as Weston Park Museum. This removed the separate identity of the Mappin Art Gallery. The museum closed again in summer 2016 for a refurbishment and to celebrate the tenth anniversary of the renovation.

The museum's archaeology exhibits include a replica of the Bronze Age rock art from Gardom's Edge and many items collected by Thomas Bateman, notably the Benty Grange helmet which closely matches the descriptions of warriors' helmets in Beowulf. There are seven galleries: the Harold Cantor Gallery; Sheffield Life and Times; History Lab; Arctic World; What On Earth!; Treasures; and Picturing Sheffield. The Harold Cantor Gallery houses temporary exhibitions, which include major touring exhibitions from national partners such as the V&A and British Museum.

The museum is home to one of the longest serving weather stations in the country, providing data on Sheffield's weather since 1882.

Weston Park museum receives around 250,000 visitors a year and was nominated for the prestigious Gulbenkian Prize in 2007. In 2008 the museum won The Guardian's Family Friendly Museums award.

All content from Kiddle encyclopedia articles (including the article images and facts) can be freely used under Attribution-ShareAlike license, unless stated otherwise. Cite this article:
Weston Park Museum Facts for Kids. Kiddle Encyclopedia.