Wheeling Historic District, also known as the Wheeling Central Business District, is a national historic district located at Wheeling, Ohio County, West Virginia. The district includes 205 contributing buildings in the central business district of Wheeling. It includes the site of the original location of Fort Henry. The buildings are representative of a number of popular architectural styles from the early-19th century through the present including Greek Revival and Late Victorian. The District was listed on the National Register of Historic Places in 1979.

Contributing buildings in the district include: 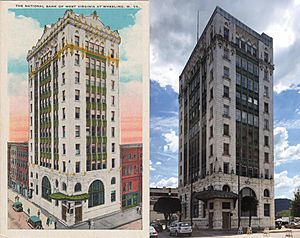 Two views of Charles Bates' National Bank of West Virginia, later home to the W.M. Marsh Drug Company, built 1914-15 in the Wheeling Central Business District. At left is the original structure as depicted in a postcard ca. 1915, and at right is the building in 2016, shorn of its elaborate entablature.

It also includes the West Virginia Independence Hall and Baltimore and Ohio Passenger Terminal (1907-1908), which are listed on the National Register of Historic Places as individual buildings.

All of the following are located in Wheeling, Ohio County, WV:

All content from Kiddle encyclopedia articles (including the article images and facts) can be freely used under Attribution-ShareAlike license, unless stated otherwise. Cite this article:
Wheeling Historic District Facts for Kids. Kiddle Encyclopedia.