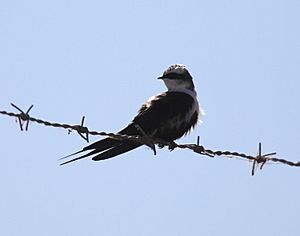 John Gould first described the white-backed swallow in 1841 and included it in his publication “The Birds of Australia”. The white-backed swallow is also sometimes referred to as “Black-and-white Swallow", "White-breasted Swallow", "White-capped Swallow.". A taxonomic synonym for Cheramoeca leucosterna is Cheramoeca leucosternus. 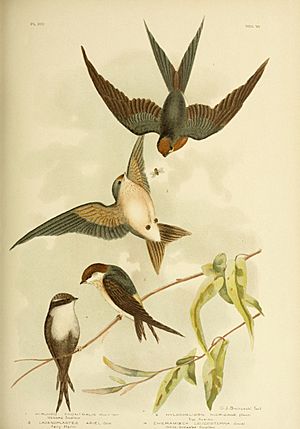 An adult white-backed swallows averages 15 cm long, similar in size to other swallows found within Australia. The adult has a mottled grey cap above white eyebrows and a grey eye stripe across the nape of the neck. The back and most of the breast is white. The belly, wings and tail are black.

White-backed Swallows are endemic to Australia and have a wide population distribution on the continent. They can be found from the southern latitudes of Australia and their range extends to the Tropic of Capricorn. Occasionally, after inland rainfall, white-backed swallows can extend their range to encompass the entire southern portion of Australia including the desert regions. White-backed Swallows prefer open country, above open grassland and low shrubs. During the breeding season, they have a strong preference for habitats around creek beds.

There is no population count, but the species is reported to be common. Due to range expansion from land clearance and mining, the population is estimated to be increasing. Due to the large range and increasing population, the white-backed swallow is categorised as least concern. 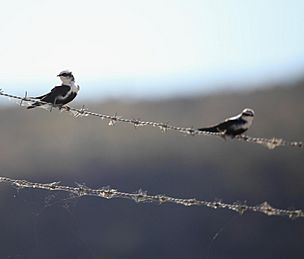 White-backed Swallows are insectivorous and feed in-flight on insects, like all known swallows. The composition of its diet varies by geographic region and with the time of year. The white-backed swallow typically nests by digging a horizontal tunnel into a vertical dirt cliff. Predation of swallows nests is known to occur, typically from foxes and cats.

All content from Kiddle encyclopedia articles (including the article images and facts) can be freely used under Attribution-ShareAlike license, unless stated otherwise. Cite this article:
White-backed swallow Facts for Kids. Kiddle Encyclopedia.