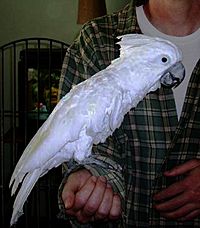 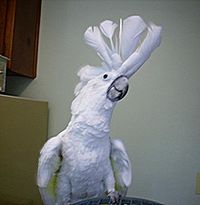 The white-crested cockatoo, Cacatua alba, is a bird. It is also called the white cockatoo and the umbrella cockatoo. It is one of a larger group of birds in the family Cacatuidae. Cockatoos are a kind of parrot.

Cockatoos have black bills made of keratin. They have black feet. The white-crested cockatoo is about 17.5 inches long.

The White Cockatoo is considered vulnerable by the IUCN. Its numbers in the wild have declined owing to capture for the cage bird trade and habitat loss. It is listed in appendix II of the CITES list which gives it protection by restricting export and import of wild-caught birds. BirdLife International indicates that catch quotas issued by the Indonesian government were 'exceeded by up to 18 times in some localities' in 1991. RSPCA supported surveys by the Indonesian NGO ProFauna suggest that significant levels of trade in wild-caught White Cockatoos still occur, with 200+ taken from the wild in north Halmahera in 2007. Approximately 40% of the parrots (White Cockatoo, Chattering Lory, Violet-necked Lory and Eclectus Parrot) caught in Halmahera are smuggled to the Philippines, while approximately 60% go to the domestic Indonesian trade, especially via bird markets in Surabaya and Jakarta.

All content from Kiddle encyclopedia articles (including the article images and facts) can be freely used under Attribution-ShareAlike license, unless stated otherwise. Cite this article:
White-crested cockatoo Facts for Kids. Kiddle Encyclopedia.