Wickett is a town in Ward County, Texas, United States. The population was 498 at the 2010 census.

According to the United States Census Bureau, the town has a total area of 0.7 square miles (1.8 km²), all of it land.

There were 173 households out of which 32.9% had children under the age of 18 living with them, 57.2% were married couples living together, 11.0% had a female householder with no husband present, and 25.4% were non-families. 19.7% of all households were made up of individuals and 9.8% had someone living alone who was 65 years of age or older. The average household size was 2.63 and the average family size was 3.00.

The following is a short history of Wickett's beginnings.

If it had not been for George W. O'Brien, the place which was to become Wickett might have remained as Aroya, merely a switch and a section house on the Texas and Pacific Railroad, established to house one of the maintenance crews for the railroad. O'Brien gave Southern Crude's camp (for employees), for offices, tank farm and loading racks. O'Brien furnished the land for the townsite which was to become Wickett (named for Fred H. Wickett, a chairman of the Pan American Petroleum and Transport Co., of which Southern Crude was a subsidiary.).

Wickett's official "birthday" was February 14, 1927; and the rush for residence and business lots in the new town was like the early days of Nevada and California. After celebrating its four-weeks birthday on March 4, 1927, Wickett's "fathers" were planning to make it the county seat of Ward County.

The new town's early arrivals lived in crude frame shacks, in tents and under wagons. A two-story, forty-two room hotel was constructed. The Bluebonnet Refinery was built in Wickett by a group of men under the leadership of B.L. Woolley of Dallas and H.B. Hassett of St. Louis, Missouri, to process crude oil, gasoline, kerosene, diesel and other fuel oil.

Onnie Mae O'Brien became the first Postmistress on June 14, 1927 after a petition was circulated for the designation of Wickett for a U.S. Post Office.

Wickett Independent School District was created on August 20, 1928, by taking 14 sections from the Monahans District and 21 sections from the Pyote District. The Wickett School District was one of the richest of its size in the state. A two-room brick building was constructed and in about 1932 a two-room cafeteria was built. The 14 sections was returned to Monahans District in 1931. In 1928 Bluebonnet Refinery was sold and the name was changed to Wickett Refinery Co. Gulf Oil Corporation acquired the properties of Southern Crude. The Wickett Refinery was closed in May 1973.

In 1936 a consolidation of the Wickett and Monahans schools was agreed upon because of declining enrollment. It was understood that an elementary school would remain in Wickett. On April 1, 1937, it was announced that the district was now the Monahans-Wickett Independent School District. Until 1953 the school was known as Wickett Ward School, but after the death of Mrs. Helen Gensler (a teacher), the Trustees on January 13, 1953 voted to change the name of the Helen Gensler Elementary School. 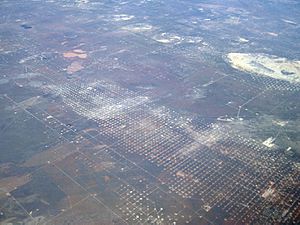 In 1937, the Cabot Companies of Boston Mass., brought a sizeable new industry to Wickett. A plant was established to extract "natural gasoline" and other liquid hydrocarbons which could be extracted from natural gas. In addition, a factory for the production of carbon black was constructed to claim the residue available from the burning of the "dry" gas. At the height of its operations, Cabot was second only to Gulf Oil as the largest private employer in Ward County. Although Wickett, like many West Texas communities, lost population in the 1950s and 1960s, the community was incorporated in March 1962 so that water and sewer services would be available to its residents. The first mayor was Harold Massey, son-in-law of G.W. O'Brien. Other officials were: C.W. Ross Sr., City Marshall, and councilmen were: W.O. Luckie, D.P. Fambrough, Alvie Pardue, V.C. Moore and F.E. Parker. There were 100 votes for the incorporation of Wickett and 53 votes against the incorporation.

All content from Kiddle encyclopedia articles (including the article images and facts) can be freely used under Attribution-ShareAlike license, unless stated otherwise. Cite this article:
Wickett, Texas Facts for Kids. Kiddle Encyclopedia.