Will Rogers Memorial facts for kids

Kids Encyclopedia Facts
Not to be confused with Rogers-Post Site or Will Rogers Memorial Center.

The Will Rogers Memorial Museum is a 19,052-square-foot (1,770 m2) museum in Claremore, Oklahoma that memorializes entertainer Will Rogers. The museum houses artifacts, memorabilia, photographs, and manuscripts pertaining to Rogers' life, and documentaries, speeches, and movies starring Rogers are shown in a theater. Rogers' tomb is located on its 20-acre (8 ha) grounds overlooking Claremore and Rogers State University.

Until March 7, 2016, the museum was managed by the Will Rogers Memorial Commission, a state agency. On that date, the Governor of Oklahoma signed legislation dissolving the state commission and transferring the property and all its assets to the Oklahoma Historical Society, another state agency. 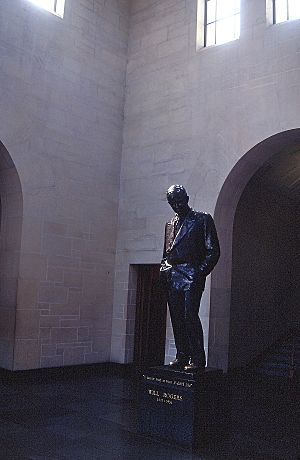 Will Rogers was born near Oologah, Oklahoma, where his father had settled. He had originally purchased the land in 1911, a plot containing 20 acres (8.1 ha) that overlooks the Tiawah Valley, as the site of his retirement home. The price was reportedly $500 per acre. After his death, it was passed on to members of the Rogers family. Will's widow, Betty Rogers, donated the property in 1937, during the Great Depression, to the state of Oklahoma.

The Oklahoma legislature appropriated $200,000 for the construction of a museum honoring Rogers. The original 15,000-square-foot (1,400 m2) limestone building was designed by John Duncan Forsyth. Groundbreaking occurred April 21, 1938, with Will's sister, Sallie Rogers McSpadden, turning the first spadeful of dirt. Construction was completed November 4, 1938, on what would have been Rogers' 59th birthday. The museum opened in 1938, three years after Rogers' death.

The rotunda contains a famous sculpture of Will Rogers by artist Jo Davidson. The pedestal is inscribed with a famous quotation by Rogers, "...I never met a man I didn't like." The statue is another cast of the work that the artist created in 1938 and which has represented the state in the National Statuary Hall at the United States Capitol.

The 1983 addition includes a large library and offices that serve as research areas for scholars and writers. This area covers 2,400 square feet (220 m2) and holds more than 2000 volumes relevant to Will Rogers, plus other topics such as Indians, genealogy, vaudeville, early motion pictures. and history of the 1879–1935 era. Museum archives also contain an estimated 18,000 photographs, as well as thousands of original manuscripts, private letters, contracts, and personal papers, as well as motion pictures, home movies, and audio tapes.

Merger with the Oklahoma Historical Society

There was little opposition to the merger, which was unanimously approved by the Joint Appropriations Budget Committees of both the Oklahoma House of Representatives and the Senate. Tad Jones, director of the Memorial, noted that the Memorial had previously been targeted by political budget cutters for several years, and a bill had been introduced during the previous year to eliminate state contributions to the museum. He expressed a belief that the merger would reduce pressure to cut the museum's funding.

The merger was enthusiastically approved by Rogers' descendants, according to Jennifer Rogers-Etcheverry, a member of the Will Rogers Memorial Commission and great-granddaughter of Will Rogers. She said that she saw no disadvantages to the merger. The Act also requires that the governor appoint a direct descendant of Rogers to the OHS board of directors.

All content from Kiddle encyclopedia articles (including the article images and facts) can be freely used under Attribution-ShareAlike license, unless stated otherwise. Cite this article:
Will Rogers Memorial Facts for Kids. Kiddle Encyclopedia.