Claremore is a city and the county seat of Rogers County, Oklahoma, United States. The population was 18,581 at the 2010 census, a 17.1 percent increase from 15,873 at the 2000 census. It is part of the Tulsa Metropolitan Area and home to Rogers State University. It is best known as the home of entertainer Will Rogers. 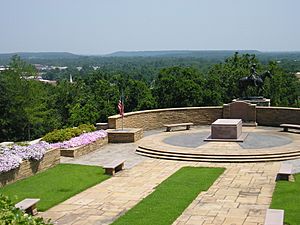 The Will Rogers Memorial overlooks Claremore's position in the foothills of the Ozark Mountains.

Around 1802, a band of Osage Indians settled in the area of present-day Claremore. The town's name came from an Osage chief called "Gra-moi", French traders in the area pronounced his name as "Clairmont", which means "mountain with a clear view", The Osage village was destroyed in 1817, during the Battle of Osage Mound. The area experienced some minor damage during the American Civil War, but quickly recovered after the end of the conflict.

After the Indian Removal Act of 1830 was passed by the United States, Claremore became part of Indian Territory and the Cherokee Nation. Claremore was a part of the Cooweescoowee District in the northwestern part of the Cherokee Nation. The Rogers family, for whom the county is named, was among the first settlers. Clem Rogers, father of the famous Will Rogers, who, along with his family, is buried at the Will Rogers Memorial, moved to the county in 1856. His ranch, known as Dog Iron Ranch eventually was more than 60,000 acres (240 km2), and his home, which still stands outside Oologah, is an important historical site. Clem Rogers was a major advocate of Oklahoma statehood and was the oldest delegate to the state's Constitutional Convention in 1907 at age 69.

A post office was established on June 25, 1874. The coming of railways to Indian Territory was the driving factor in Claremore's early growth. Two early lines intersected in the center of town. The name of Claremore changed from Clermont to its present spelling on September 19, 1882. A clerk recording the town as having a post office spelled the name incorrectly, and it stuck. The city was incorporated in the Cherokee Nation on May 2, 1903.

Another major factor in the growth of Claremore was an area known as "Radium Town". In 1903, a man named George Eaton owned an oil company in Claremore. He had moved his family to Claremore area in 1874, where his principal businesses were farming and cattle raising. He subsequently branched into the mercantile business, real estate and oil exploration. He was drilling just to the east of Claremore and struck an underground pool of water that smelled of sulfur. A local doctor, Dr. W. G. Williams, tested the water and marketed it as a cure. The water, known as "Radium Water", contained no radium, but hydrogen sulfide and sulfur compounds that supposedly made it medically useful. Eaton then built a bath house and promoted this development as Radium Town. Bath houses sprang up all over this area of Claremore, but only one is still standing today. Radium Town was centered on 9th Street between Seminole and Dorothy in present-day Claremore.

Claremore's first hospital was established on Will Rogers Boulevard, or Oklahoma State Highway 20, in the early 1900s. Today it can be seen, with windows boarded up, just off the road. Claremore's newspaper, the Claremore Daily Progress, was established in 1893 by cowboy Joe Klein and is still published daily. It is the oldest business in Rogers County.

There are many historic homes and other buildings in Claremore, including the old business district. In 2002, Claremore's historic core received a rebuilding grant from the state's Oklahoma Main Street program. Renovation work on the downtown was completed in 2007.

The Rodgers and Hammerstein musical Oklahoma! is set in Claremore and the surrounding area, in 1906 (the year before Oklahoma became a State). The Quantum Leap (TV series) episode "8½ Months" is also set near Claremore. The movie Where the Heart Is starring Natalie Portman and Ashley Judd fictionally portrays Rogers County and the area surrounding Claremore.

The city is located in Green Country, a popular nickname for northeast Oklahoma that stems from the region's green vegetation and relatively high amount of hills and lakes compared to central and western areas of Oklahoma. Claremore lies near the Verdigris River with undulating terrain producing hills and valleys. The city's primary water sources are Claremore and Oologah Lake, both within the drainage basin of the Verdigris River. 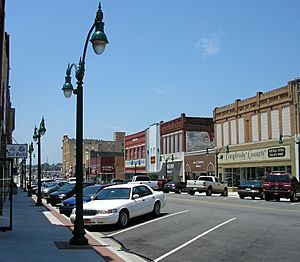 Claremore is a major intersection of heavily traveled highways. Interstate 44 crosses the city to its southeast. State Highway 66 (historic US-66) forms one of the main roads of the town. The city is also intersected by State Highway 88 and State Highway 20.

Two railroads, the St. Louis, Iron Mountain, and Southern Railway (now controlled by Union Pacific) and the St. Louis-San Francisco Railway or "Frisco" (now controlled by BNSF), intersect in Claremore. The traffic problems spawned by the intersection of two major national rail lines has led to discussion among city officials about how best to improve traffic flow. As of 2007, the city plans to elevate the BNSF railroad throughout the entire town.

There were 6,283 households out of which 33.6% had children under the age of 18 living with them, 49.6% were married couples living together, 12.4% had a female householder with no husband present, and 33.7% were non-families. 29.7% of all households were made up of individuals and 13.8% had someone living alone who was 65 years of age or older. The average household size was 2.43 and the average family size was 3.02. 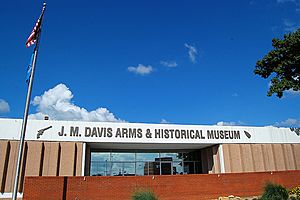 All content from Kiddle encyclopedia articles (including the article images and facts) can be freely used under Attribution-ShareAlike license, unless stated otherwise. Cite this article:
Claremore, Oklahoma Facts for Kids. Kiddle Encyclopedia.