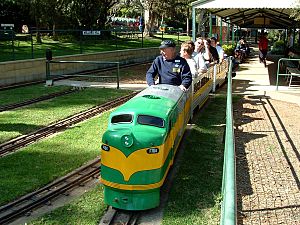 The railway was established in 1978. Founded by Raymond Catts He advertised for interested persons to form a club for the display and use of models, it took from 1978 until 1980 to get the numbers to start a Technical Education course in workshop practice which was in fitting and machining, from this course the numbers grew and land was found to establish what is to-day. It is operated by the Wagga Wagga Society of Model Engineers. It includes 3 km of a combined 7 1/4 inch and 5 inch track, two stations, two tunnels, three bridges, four buildings, 6 locomotives owned by the club and a number of personally owned locomotives.

An annual Invitational Run has been held every year since 1988 on the first weekend of November. Miniature trains from all over Australia converged here for two days of train running. Traditionally, the Saturday is for club members only and the Sunday event is open for public running.

There are currently three routes in use. The main line which is a shorter route that runs within the boundaries of the botanical gardens itself. The museum line which takes the trains under Lord Baden Powell Drive over to the loop next to Museum of the Riverina car park. The spiral line which runs around a spiral and then returns via either the museum line or the main line.

A new addition to the club is a new locomotive, The T387 which was purchased from Adelaide for $28,000.00. This locomotive had its maiden run on the tracks in October 2018.

All content from Kiddle encyclopedia articles (including the article images and facts) can be freely used under Attribution-ShareAlike license, unless stated otherwise. Cite this article:
Willans Hill Miniature Railway Facts for Kids. Kiddle Encyclopedia.