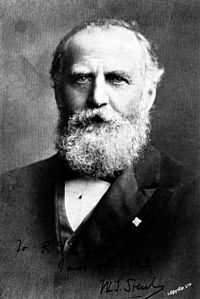 William Thomas Stead (5 July 1849 – 15 April 1912) was a British writer and journalist. He was a pioneer of investigative journalism, and one of the most controversial figures in British journalism during the Victorian era.

His death occurred during the sinking of RMS Titanic.

All content from Kiddle encyclopedia articles (including the article images and facts) can be freely used under Attribution-ShareAlike license, unless stated otherwise. Cite this article:
William Thomas Stead Facts for Kids. Kiddle Encyclopedia.