Willie B. facts for kids 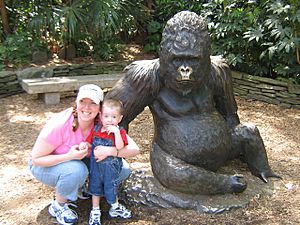 People often pose with the Willie B. bronze statue at Zoo Atlanta.

Willie B. (C. 1959 - February 2, 2000) was a western lowland gorilla who lived at the Zoo of Atlanta for 39 years, from 1961 until his death on February 2, 2000. He was named after the former mayor of Atlanta, William Berry Hartsfield. Willie B. was kept in isolation for 27 years with only a television and a tire swing to keep him company. In 1988, he was moved to an outside exhibit and allowed to socialize and raise a family. He then embraced his role as silverback and leader of a troop.

Willie B. was the second Gorilla known by that name at the Atlanta Zoo. The previous Willie B. died at the age of 3 shortly before the better-known successor was purchased. Both Willie B's had been purchased from international gorilla hunter Dr. Deets Pickett of Kansas City. The second Willie B. cost $5,500 to obtain for the zoo.

Willie B. fathered five offspring at Zoo Atlanta: Kudzoo, Olympia, Sukari, Kidogo, and Lulu. Kidogo, the only male offspring, took on the name Willie B., Jr. after his father died, taking his place as the heir. When he died at the age of 41, he was the oldest gorilla in the United States to have fathered offspring.

More than 8,000 people attended the memorial ceremony held in his honor, and the zoo now has a life-size bronze statue of him on permanent display outside the Gorilla exhibit. His remains were cremated and 80 percent of his remains were kept in a bronze box in the bronze statue at Zoo Atlanta and the other 20 percent were flown back to the African jungle. The Atlanta Silverbacks soccer team was named in his honor.

All content from Kiddle encyclopedia articles (including the article images and facts) can be freely used under Attribution-ShareAlike license, unless stated otherwise. Cite this article:
Willie B. Facts for Kids. Kiddle Encyclopedia.