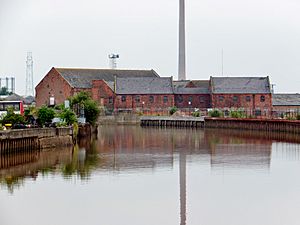 Wilmington is an industrial area east of the River Hull in Kingston upon Hull, England. 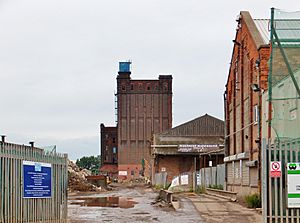 Wilmington is bounded by the River Hull to the west, with Wincolmlee and Sculcoates beyond; Stoneferry is to the north; and to the south is the area known as The Groves in Drypool; to the east is Summergangs and the Garden Village. The area is primarily industrial, with activities including recycling, aggregates, manufacturing; as well as sales and service businesses, including those service industrial clients, and the building trade. Larger businesses and activities include the 'Robin Concrete Waste Disposal Ltd.' plant, the Stagecoach Hull bus depot

Main roads are the A1033 (Stoneferry Road / Mount Pleasant) and A1165 (Cleveland Street) which run from the A63 Hull-Hedon main road in the south to Stoneferry in the north. The Hull Docks elevated railway also passes through the area. Crossings of the river are by the dock branch "Hull bridge" swing railway bridge, and by the "Sculcoates bridge" on Chapman Street at the northern and southern fringes of the area respectively. A former railway bridge, now a foot and cycle path "Wilmington Swing Bridge" crosses the river roughly halfway between the two.

There is very little housing in the area, with the exception of a permanent caravan site, 'Wilmington Park'. The area has some pollution/nuisance smell/dust problems: contributors include road traffic, factories, and waste-management facilities, the former cocoa factory was also a contributor.

In 1846 the Hull Glass Company was set up in Wilmington, on the north side of the street now known as "Glass House Row", the company rapidly went out of business, being inactive by 1850.

By the mid 1850s development in Wilmington included the buildings of the glass works; a cement works and brick field; and in the southern part along the river an number of industrial buildings including the 'Phoenix Mill' (oil), and 'Wilmington' (oil and glue) and 'Greenland' yards. Much of the area was undeveloped; the area was outside, and on the edge of the growth of the town of Hull.

The Hull and Hornsea Railway opened in 1864, initially terminating at Wilmington station, just before the junction with the dock line, in the same year the Victoria Dock Branch Line, excluding the River Hull bridge, was doubled. Sidings south of the junction between the Hull-Hornsea, and Victoria Dock Branch lines developed from a coal drops and a single siding in the mid 19th centuries, to a full goods station, Wilmington goods by the beginning of the 20th.

In 1866 Earle's Cement acquired the cement works on the near the river bank and land south of the Victoria Dock Branch Line; the works was connected by rail sidings to the dock branch. Production was around 3000t pa of Roman cement in 1870. From 1875 bottle kilns were constructed for the production of Portland cement, with a capacity of 38t per week by around 1882. From 1888 chamber kilns were installed, with 28 in total by 1898 with a total capacity of 980t per week. The first two Rotary kilns were installed in 1906, adding a capacity of 860t per week. Further rotary kilns were added in 1912 and 1920, by which time the location of the plant was seen a non-optimal, Earle's large plant in Hope, Derbyshire being preferred. 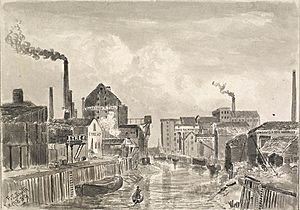 At the southern edge of the area a swing bridge road crossing the River Hull, Sculcoates bridge, was opened in 1875. The bridge consisted of a fixed span on the east bank of 27 feet (8.2 m) and a counterbalanced swing span made of 113 feet (34 m) girders, with a river span of 56 feet (17 m). The design was by J. Fox district engineer, the bridge was constructed by the Bridge and Roofing Co. of Darlaston. Total cost was £18,000. In 1885 the Hull and Barnsley Railway opened, with a branch to the new Alexandra Dock passing on an embankment through the northern extremity of the Wilmington area, crossing Cleveland Street at height; a swing bridge was built over the River Hull. An embanked chord was built to connect the line to the Victoria Dock Branch Line, adding a third railway bridge over Cleveland Street;{{#tag:ref|The H&B constructed the infrastructure for a connecting chord between their line and the Victoria Dock Branch Line, but refused to complete the actual junction connecting their line and NER system.Tomlinson (1915, p. 707) Part of the line was later used for a branch to the sidings of the British Extracting Company.

By the late 1880s urban growth in east Hull northwards from Drypool through the Groves had reached the edges of Wilmington; a school, "Chapman Street school", was established on Chapman Street by the school board in 1888 for 866 children, it was expanded to a capacity of 1,163 students in 1902. In 1898 an iron church was opened; it was replaced in 1903 by a brick church, St Saviour, architects Brodrick, Lowther, and Walker.

The large Swan Flour Mill (Rishworth, Ingleby & Lofthouse Ltd. ) was built in 1897, and expanded in 1898, with the silo added 1906. Also established by this time, north adjacent to the Swan Flour mill were the Hull Varnish works; Wilmington Yard, later Cleveland Oil Refinery; Wilmington works; the Wilmington Oil Mills; and a flour mill, later expanded as Wilmington Flour Mill; further north on Glass House Row was the Anglo-American mill, also the 'Bon Accord Mill'.

In the early 1900s a canister (metal tins) works was established by John Wilson (Shipley); Reckitt and Sons acquired the works in 1907. 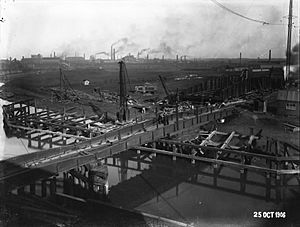 Between 1910 and 1912 the railway layout at Wilmington was altered: a new station was constructed west of the original on the Victoria Dock Branch Line, and the level crossing at Cleveland Street replaced with a bridge. A new double track swing bridge had also been constructed over the Hull, c. 1905, slightly to the north of the original single track bridge. The bridge was designed by NER staff J. Triffit under W.J. Cudworth, and erected by R Woods (Westminster) with steelwork from John Butler & Co. (Stanningley): a 75°33' skew, made of plate girders to a 14 feet (4.3 m) maximum depth hogback design, 160 feet (49 m) long total. The bridge turning mechanism was electrically powered, using Siemens Bros. equipment, and controlled by a cabin above the bridge; the designer was Wilson Worsdell, also of the NER, and the contractors Cowans and Sheldon.

A cinema, the Cleveland on Cleveland Street was opened in 1914.

In 1915 the British Extracting Co. (subsidiary of British Oil and Cake Mills) acquired the site of a former brickyards, and began oil processing operations; a large silo and river in-shipment facility was completed in 1919, to the design of architects Gelder and Kitchen. The plant was connected to the rail network by a branch line running off the Hull Docks Branch. The plant concentrated on the production of cooking fat and margarine. An extension factory for the production of New Pin Soap was opened in 1921. The British Soap Company entered into vigorous competition, affecting the soap business of Lever Brothers; in 1925 Lever Brothers acquired the parent company British Oil and Cake Mills, ending the cut-throat competition; the factory closed by 1934.

In 1940 Gill & Duffus established a cocoa mill, British Cocoa Mills (Hull) Ltd., at Cleveland Street, on the site of the former Wilmington works. 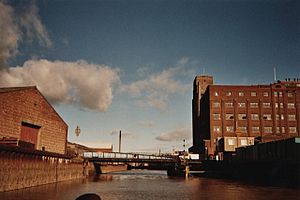 The River Hull corridor was one of ten primary Luftwaffe targets during the Hull Blitz, and the focus of the attack on the nights of 13 and 18 March 1941. Spillers Mill was practically destroyed by the bombing, Also damaged were the Chapman Street school, and the Cleveland cinema. Spillers Mill was rebuilt in the late 1940s and early 1950s, including a reinforced concrete silo 160 feet (49 m) high with a capacity of 10,000 tons.

In 1948 an explosion and fire destroyed the Hull cocoa factory resulting in several deaths; a tank containing petrol used in the cocoa manufacturing process ruptured, and was ignited. A mill was rebuilt by 1952.

Wilmington station closed in 1964, the Victoria Dock Branch Line closed 1968. The Wilmington cement works closed in 1969. The Cleveland cinema was demolished in 1960.

Also in the 1970s the pattern of housing established c. 1900 was removed; by the 1980s practically none of the Victorian housing remained, and the area became predominately industrial or undeveloped. A caravan site opened in Wilmington in 1976. St Saviours church was demolished 1981.

In the 1990s the former Stoneferry canister works, with other land between the Victoria Dock and Hull and Barnsley railway branches west of Cleveland Street was redeveloped into an industrial estate Stoneferry Park; the 32 acres (13 ha) area included over 900,000 square feet (84,000 m2) of old buildings, of which 200,000 square feet (19,000 m2) were kept, and by 2002 a further 220,000 square feet (20,000 m2) of new industrial accommodation had been built. In around the same time period a new bus depot for the Hull bus fleet (Stagecoach in Hull) was constructed to the south, the depot opened 1 September 1996.

In 1999/2000 planning applications were submitted for a waste handling facilities including composting and incinerating facilities at Foster Street, with an incinerator on the site of the former British Extracting Co. works. The plans were submitted in relation to a 25-year waste management contract made with Waste Recycling Group by Hull City Council; The works included a 263 feet (80 m) chimney, and buildings of around 151 and 125 feet (46 and 38 m) high. the proposed £30 million works was to burn around 150,000 tonnes of waste per year, generating electricity plus 850 tonnes of ash re-usable for construction and 120 tonnes of ash requiring landfill disposal per year – the plans generated significant opposition. The incinerator was recommended for approval but refused by the council in 2001, and refused on appeal in 2003. 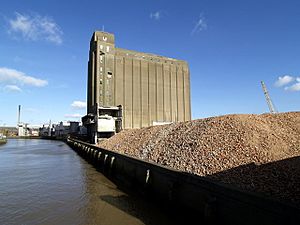 Remains of demolished Spillers mill, with 1950s concrete silo behind (2008)

In 2010 ADM Cocoa closed the cocoa mill, citing overcapacity and a move of confectionery production to eastern Europe.

In June 2011 a planning application was submitted by Spencer Group for an waste to energy plant designed to generate 25.5 MW electrical and 3.4 MW gas energy via gasification and anaerobic digestion respectively. The plant was split over two sites, part on the site of the former cocoa and Spillers mills; and the second part to the north, west of Glass House Row. The plant was to use approximately 150,000 tonnes of waste wood, plus 37,000 tonnes of locally sourced commercial and industrial waste. The application was accepted in October 2011. and the project received a £19.9 million grant from the UK government (via the European Regional Development Fund) which was authorised by European Union in 2012.

In 2014 a joint venture of Spencer group and MWH Global subsidiary MWH Treatment was selected to build the first stage of the £150 million project. The plant obtained via auction CFD funding in early 2015, with a £119.89 per MWhr strike price. In late 2015 Spencer Group announced that funding for the scheme had been arranged, with construction to start early 2016, with the facility expected operational by early 2018.

All content from Kiddle encyclopedia articles (including the article images and facts) can be freely used under Attribution-ShareAlike license, unless stated otherwise. Cite this article:
Wilmington, Kingston upon Hull Facts for Kids. Kiddle Encyclopedia.