Winameg is an unincorporated community in Fulton County, in the U.S. state of Ohio. Pike Township maintains its government and maintenance facilities in Winameg. 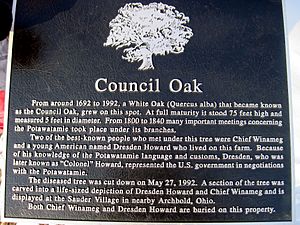 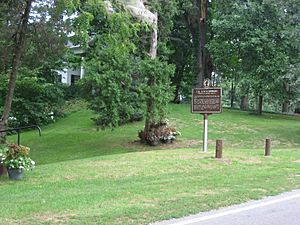 The community is named after a Potawatomi Indian chief, named Winameg. The chief became friends with a white pioneer. They first met under a large white oak tree that stood until 1992 in Winameg. The tree is referred to as the Council Oak. A historical plaque marks where it once stood. Chief Winameg is buried in Winameg, alongside his friend Dresden Howard. Chief Winameg and Howard are remembered in Fulton County with life-size depiction of both figures, carved from the wood of a historical tree in Winameg under which the two first met, and displayed at Sauder Village in Archbold, Ohio.

A post office called Winameg was established in 1856, and remained in operation until 1902.

All content from Kiddle encyclopedia articles (including the article images and facts) can be freely used under Attribution-ShareAlike license, unless stated otherwise. Cite this article:
Winameg, Ohio Facts for Kids. Kiddle Encyclopedia.