Wings Over Miami facts for kids

The museum was conceived as a replacement for the Weeks Air Museum which had been located at the airport, but which was moved to Polk County, Florida after having its facility and almost all of its aircraft damaged by Hurricane Andrew in 1992.

The departure of the Weeks collection left an aviation historical deficit in the Miami area. In 2001 four military and classic plane enthusiasts decided to create a new museum to use the facility. The new museum's board was made up of its founders: Walter Orth, Larry Ploucha, Vincent Tirado and Tom Righetti. They agreed from the start that Wings Over Miami would be a flying museum, meaning that aircraft from the collection would be airworthy and would be flown regularly.

The aircraft collection that was assembled included representation from a broad range of aviation history, including vintage aircraft, World War II and the Cold War.

Special events that benefit the museum include an annual car show that features antique & classic vehicles and Corvettes presented by the South Florida Region of the Antique Automobile Club of America and the Sunshine Corvette Club. 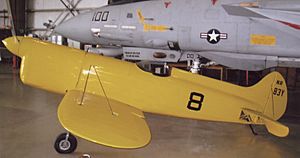 Brown B-1 Racer at Wings Over Miami 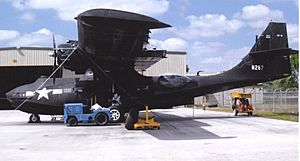 Consolidated PBY-5A Catalina in US Navy markings at the museum 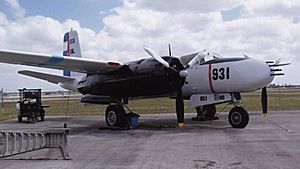 All content from Kiddle encyclopedia articles (including the article images and facts) can be freely used under Attribution-ShareAlike license, unless stated otherwise. Cite this article:
Wings Over Miami Facts for Kids. Kiddle Encyclopedia.