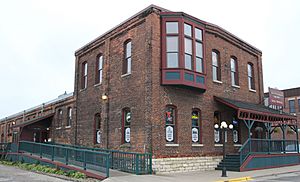 Through mergers and acquisitions, the building continued to serve as a railroad office and freight house until 1961. As of 2017 the west end of the building houses the Jefferson Pub & Grill, which keeps vintage railroad photographs and memorabilia on display.

All content from Kiddle encyclopedia articles (including the article images and facts) can be freely used under Attribution-ShareAlike license, unless stated otherwise. Cite this article:
Winona and St. Peter Railroad Freight House Facts for Kids. Kiddle Encyclopedia.