The Wisconsin Center (formerly Midwest Express Center, Midwest Airlines Center, Frontier Airlines Center and Delta Center) is a convention and exhibition center located in downtown Milwaukee, Wisconsin. The center is part of a greater complex of buildings which includes the UW–Milwaukee Panther Arena and the Miller High Life Theatre, and was a replacement for the former Great Hall portion of the MECCA Complex. The building was previously named after its sponsor Delta Air Lines, who had purchased naming rights to the facility in August 2012. On June 30, 2013, Delta terminated its naming rights at the center and the facility was officially renamed the "Wisconsin Center" the following day.

The convention center hosted the 2020 Democratic National Convention. The event was initially planned to be held in the nearby Fiserv Forum but was ultimately downsized due to the COVID-19 pandemic in Wisconsin.

The venue is operated by the Wisconsin Center District, which also operates the adjacent UW–Milwaukee Panther Arena and Miller High Life Theatre.

The naming rights were initially sold to Midwest Airlines. On April 13, 2010, Republic Airways Holdings CEO Bryan Bedford announced that the name would change to Frontier Airlines Center, coinciding with the consolidation of brands between Frontier Airlines and Midwest Airlines. On August 15, 2012, Delta Air Lines purchased the building's naming rights as part of the carrier's recent expansion at Milwaukee's General Mitchell International Airport. The facility changed its name from the Frontier Airlines Center to the Delta Center effective from September 19, 2012; signage was replaced accordingly in November.

The center is the largest design-build project in Wisconsin. Art was incorporated early in the design stage; the Hilton's skywalk entrance foyer floor features a green floor mosaic in the shape of Wisconsin, with Michigan depicted in gold, Minnesota in pink, Iowa in red, and Illinois in gray. Region inlays represent area industries and dairy cows. A half-dozen flush bronze containers contain different soil types. 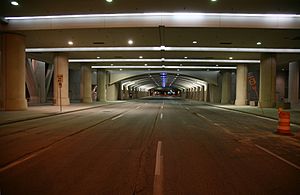 The venue straddles West Wells Street, with a tunnel for the roadway to run through it

The center's architecture reinterprets the many historic German buildings found in downtown Milwaukee. Along with art-as-design features, the John J. Burke Family Collection is scattered throughout the interior. On the Vel R. Phillips Ave side of the center is an outdoor reliquary garden named City Yard. Created by artist Sheila Klein, it contains many iconic items from Milwaukee's DPW such as fire hydrants and the classic blue police call box. Within this area are planters containing ginkgo trees and a large monument with four limestone lion heads set in relief. These architectural elements were salvaged from the AT&T building that once stood nearby.

Designed by Eppstein Uhen Architects and tvsdesign, the expansion differs in architectural style from the existing structure, being more modern and glassy.

The planned expansion nearly doubles the venue's square footage by adding an additional 112,000 square feet of exhibition space. The expansion is designed to enable the venue to hold two conventions simultaneously, with the convention center's new wing having its own separate entrance, and including a second ballroom.

The expansion would be built atop land currently occupied by parking lots on the block of the convention center between West Wells Street and West Kilbourn Avenue.

All content from Kiddle encyclopedia articles (including the article images and facts) can be freely used under Attribution-ShareAlike license, unless stated otherwise. Cite this article:
Wisconsin Center Facts for Kids. Kiddle Encyclopedia.