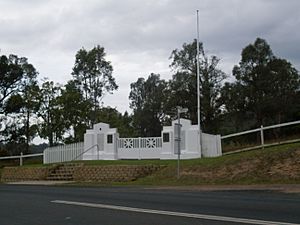 Wolumla is an historical locality in New South Wales, Australia and is between Bega and Merimbula. Wolumla is a small rural village located off the Princes Highway to the south of Bega. Wolumla is located on rolling hills on the coastal hinterland near the headwaters of Frogs Hollow Creek and has been predominantly cleared for beef, dairy and sheep grazing. At the 2006 census, Wolumla had a population of 380.

The township receives a small holiday population during peak holiday periods. The township consists of predominantly low density urban housing with a very small commercial area located on the main street consisting of a hotel, hair dresser, and general store including a post office agency. Also The Carpet Place established in 2009.

Gold was discovered very near Wolumla in 1896.

Wolumla has a public school with kindergarten to year 6, which was established in 1882. 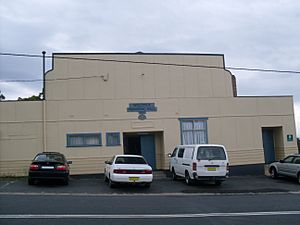 All content from Kiddle encyclopedia articles (including the article images and facts) can be freely used under Attribution-ShareAlike license, unless stated otherwise. Cite this article:
Wolumla, New South Wales Facts for Kids. Kiddle Encyclopedia.