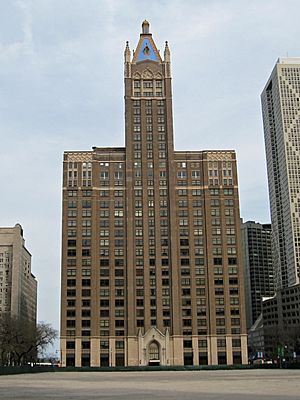 The first Woman's World's Fair was held in Chicago in 1925. The idea of the completely women-run fair was to display the progress of ideas, work, and products of twentieth-century women.

The first Women's World's Fair was held April 18–25 of 1925 in Chicago at the American Furniture Mart Building and officially opened by First Lady Grace Coolidge. The eight-day fair was the idea of Helen Bennett and Ruth Hanna McCormick. It was run entirely by women and consisted of 280 booths representing some seventy women occupations. The fair drew about 200,000 visitors, earning a net of some $50,000.

The fair's purpose was to display women's ideas, work, and products for the twentieth century. At the 1876 Centennial Exposition there had been a Women's Pavilion funded and organized by women and in particular Elizabeth Duane Gillespie. The building was over 200 square feet (19 m2) and it was in the shape of a Maltese cross. The Chicago World's Fair of 1893 demonstrated some women's handicrafts in a sewing exhibit, but this fair was to show the progress women had made in seventy industries since then. A side benefit of the fair was that it raised money for the women's Republican Party organizations. The exhibits showed women's accomplishments in the arts, literature, science, and industry. These exhibits were also an inspiration to young women in their new careers. One of the exhibitors was Illinois Bell Telephone Company. Others were newspapers, manufacturers, hospitals, banks, and retail stores. Many local enterprises had employment opportunities.

Women lawyers, inventors, and artists had booths demonstrating women's contributions in these fields. As an example, American sculptor Harriet Whitney Frishmuth was represented by her 1920 bronze work Joy of the Waters. Women's organizations were represented by the Women's Trade Union League, Business and Professional Women's Club, the Visiting Nurse Association, the YWCA, Hull House, the Illinois Club for Catholic Women, and the Auxiliary House of the Good Shepherd.

A group of about one thousand women from Sycamore, Illinois, on April 23 had breakfast with famous women. An all woman's orchestra furnished music. The speakers were women of notoriety which included women authors, business women, and various women artisans. The speeches were limited to five minutes. The main speaker was Nellie Tayloe Ross, the only state governor there. Another speaker was the collector of internal revenue of Chicago. Another was the secretary of the Cabinet Department of Commerce for President Herbert Hoover. The medical profession was represented by Dr. Alice Hamilton of Harvard University. The legal profession was represented by Judge Kathryn Sellers of Washington, D.C.

Whiting Hall was visited by the women after the speeches. The booths where artistically decorated showing some of a hundred or so different occupations in which women were employed. Some of these were antique needlework, pottery, silver fox farming, and goat breeding. Examples that received special attention were nurses and welfare workers. A key note was emphasis on earnestness, punctuality and thoroughness in whatever line of work was undertaken.

A unique feature of the first Woman's World's Fair was a daily program. There was a particular topic for each day. Besides being instructive it was entertaining. Music and dancing were especially emphasized each day. Bennett was the general director of the fair. The woman's fair was a success and held for three additional years.

All content from Kiddle encyclopedia articles (including the article images and facts) can be freely used under Attribution-ShareAlike license, unless stated otherwise. Cite this article:
Woman's World's Fair Facts for Kids. Kiddle Encyclopedia.