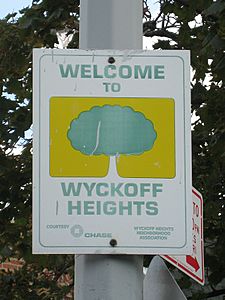 Wyckoff Heights is an area within the New York City boroughs of Brooklyn and Queens, straddling the border between Bushwick, Brooklyn, and southwest Ridgewood, Queens. Wyckoff Heights was urbanized starting in the late 19th century, and took its name from the Wyckoff family, who owned the land. The area was home first to many German immigrants, later followed by Italian and more recently Latino and Eastern-European residents. 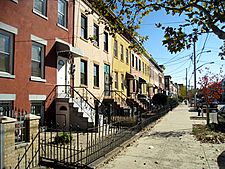 Wyckoff Heights was urbanized starting in the late 1800s, and took its name from the Wyckoff family who owned and farmed much of the land. Development progressed from Brooklyn into Queens as portions of the Wyckoff farm were sold.

In 1890 the New York Times and New York Tribune announced the creation of a new park (now Maria Hernandez Park) to be located in the Wyckoff Heights section of the 18th Ward of Brooklyn.

In 1892 Queens County property owners established the Wyckoff Heights Improvement Association to lobby for water, sewer, and gas service to the neighborhood, and in 1893 the Wyckoff Heights Water Company was formed to supply drinking water to the area.

In 1901 residents of the Queens section lobbied the City government to "adopt a system of house numbering" and erect street signs so that the postal service would begin delivery to the neighborhood. Mail delivery to the Queens section was provided by the Brooklyn Post Office from the early 1900s until 1979, when this and other areas of Queens were granted their own zip code. 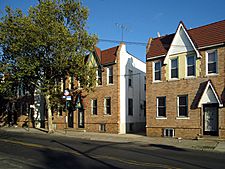 Around the turn of the century, as urbanization moved northeast towards the borough line and into Queens, developers switched to masonry construction in order to conform to new building and fire codes. Many of these buildings are now part of the Cypress Avenue West Historic District.

In the 1940s the last large-scale development in the neighborhood saw the construction of more automobile-oriented attached single-family homes with alleys and garages in the rear. 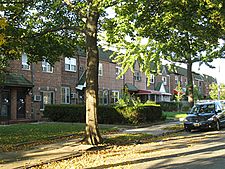 All content from Kiddle encyclopedia articles (including the article images and facts) can be freely used under Attribution-ShareAlike license, unless stated otherwise. Cite this article:
Wyckoff Heights, New York Facts for Kids. Kiddle Encyclopedia.