Xanthostemon chrysanthus, commonly named Golden Penda, also popularly known as First Love, is a species of tree in the myrtle family Myrtaceae, endemic to (found only in) north eastern Queensland.

It is a popular garden plant with showy yellow blooms.

The Golden Penda or First Love was first described in 1864 by Victorian Government Botanist Ferdinand von Mueller as Metrosideros chrysantha, after being collected by John Dallachy on 12 April 1864 from Rockingham Bay in northern Queensland. It was reclassified in the genus Xanthostemon by George Bentham in the third volume of his Flora Australiensis in 1867. The species name is derived from the Ancient Greek words chrysos "golden", and "anthos" "flower".

Xanthostemon chrysanthus grows as a tree to 10–15 metres (33–49 ft) high and 5–8 metres (16–26 ft) wide in the wild. It is generally much more compact in gardens. The bark is rough and the habit bushy. The shiny green elliptic leaves measuring 7–22 cm long by 2–9.5 cm wide. They are arranged in whorls along the stems.

The flowerheads, or racemes, are terminal or axillary and measure up to 15 cm (5.9 in) in diameter. They are made up of numerous small (1–2 cm diameter) individual golden flowers. Flowering is followed by small (1-1,5 cm) green or brown woody capsules which are ripe between August and February. Flowers can appear at any time of year. 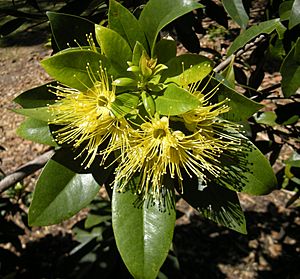 The range is from Cardwell northwards into Cape York Peninsula in Far North Queensland. It grows in open forest or rainforest, often along the banks of creeks and rivers.

Xanthostemon chrysanthus is cultivated as an ornamental plant by plant nurseries, for use in gardens and park landscaping. Its horticultural appeal stems from its profuse and attractive flowering.

Golden penda can be propagated by seed or cuttings. It grows well in subtropical gardens with fair drainage and sunny aspect. The species is less reliable in flowering in climates such as Sydney and cooler.

The golden penda tree was selected as the theme plant for Expo 88. Cuttings of the tree, which is native to north Queensland, were taken from a superior form from a garden in Brisbane and planted in flower in Brisbane to create a 'Sea of Gold'. In late autumn, the tree can still be seen in flower in gardens and lining streets across Brisbane.

The tree is also the native floral emblem of Cairns.

All content from Kiddle encyclopedia articles (including the article images and facts) can be freely used under Attribution-ShareAlike license, unless stated otherwise. Cite this article:
Xanthostemon chrysanthus Facts for Kids. Kiddle Encyclopedia.