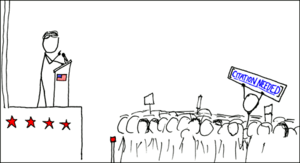 xkcd is a comic strip on the Internet. The comic is drawn and written by Randall Munroe. The comic is drawn in squares and rectangles. It is one of the most popular comics on the Internet. The comic has jokes about many things, such as mathematics, language, science and romance. Sometimes, the readers of the comic act out things that Munroe puts in his comics. There are also messages in some comics that show up when moused over. In October 2007, the comic was viewed about 60 million times. The comic has won many awards. The name "xkcd" does not have any meaning and was just made to be unpronounceable. As of November 2015, there have been over 1600 different xkcd comics.

In November 2015, Munroe wrote a book named Thing Explainer, using the same stick figure drawings from his comic. The book is about how things work, and is written in Simple English, using only one thousand different words.