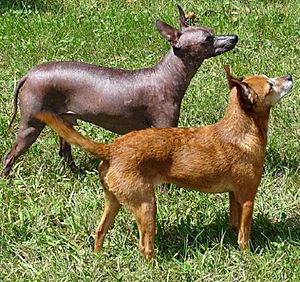 Xoloitzcuintles without and with hair.

The Xoloitzcuintle, or Xolo, also known as the Mexican hairless dog, is a breed of dog from Mexico. Most have no hair but some are born with hair (coated). The Xolo also has wrinkled skin. It is found in three sizes: toy, miniature, and standard. Its name is from the Nahuatl language, where it is called xōlōitzcuintli (singular) and xōlōitzcuintin (plural). The name comes from the god Xolotl and itzcuīntli, meaning dog in Nahuatl.

All content from Kiddle encyclopedia articles (including the article images and facts) can be freely used under Attribution-ShareAlike license, unless stated otherwise. Cite this article:
Xoloitzcuintle Facts for Kids. Kiddle Encyclopedia.