The YMCA Building is a structure in downtown Riverside, California, that has been used for various functions over the years but is currently the Life Arts Center. The Life Arts Center rents its three halls on the main floor for wedding receptions, business events, graduations and quinceañeras. The top floor has 25 studios rented by artists. These were once the hotel rooms rented to guests by YMCA. The bottom floor, which was a gymnasium, is now vacant. The building was designed in the style of an Italian Renaissance palazzo. In 1980 the building was granted historic status by the city and designated as city landmark #41. 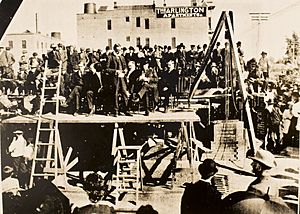 All content from Kiddle encyclopedia articles (including the article images and facts) can be freely used under Attribution-ShareAlike license, unless stated otherwise. Cite this article:
YMCA Building (Riverside, California) Facts for Kids. Kiddle Encyclopedia.