Ybor City Museum State Park is a Florida State Park in Tampa, Florida's Ybor City. The museum occupies the former Ferlita Bakery (originally La Joven Francesca) building at 1818 9th Avenue in the Ybor City Historic District. The bakery was known for producing cuban bread and its ovens are part of the museum displays covering the history of the cigar industry and the Latin community from the 1880s through the 1930s. There is also an ornamental garden in the building (available for rental after regular hours).

Tours of the gardens and the "casitas" (small homes of cigar company workers) are provided by a ranger. Exhibits, period photos and a video cover the founding of Ybor City and the cigar making industry. 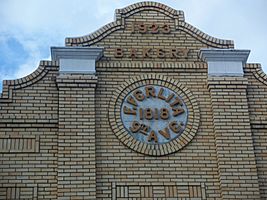 A detail of the museum's building

The Museum is housed on the site of what is likely the earliest U.S. bakery to produce Cuban bread, La Joven Francesca bakery. Established in 1896 by the Sicilian-born Francisco Ferlita, a Cuban-Spanish-Italian immigrant, bread sold for 3 to 5 cents a loaf, mainly to the Ybor City market. 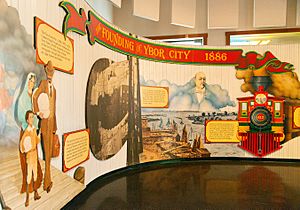 Historic display at the museum

The bakery was destroyed by fire in 1922 leaving only the brick bread oven standing. Francisco rebuilt the bakery even larger than before, added a second oven, and it became a major supplier of bread for the Tampa/Ybor area. The bakery also became a place to congregate, drink a good cup of Cuban coffee, and catch up on the local news.

In Ybor City, bread (like milk) used to be delivered every morning. Houses had a sturdy nail driven into the doorframe next to the door on which deliveryman would impale the fresh loaf of bread. La Joven closed in 1973 and was renovated and converted shortly after into a main part of the museum complex at the Ybor City State Museum. The original ovens where the original Cuban bread was baked are still viewable inside.

La Segunda Bakery ('The Second' as La Primera, 'The First,' burned down long ago) is currently the major producer of Cuban Bread for the Tampa area. It was founded by Juan Morè, who migrated to Tampa, FL, and opened La Primera Bakery in 1915.

All content from Kiddle encyclopedia articles (including the article images and facts) can be freely used under Attribution-ShareAlike license, unless stated otherwise. Cite this article:
Ybor City Museum State Park Facts for Kids. Kiddle Encyclopedia.