Eucalyptus leucoxylon, commonly known as yellow gum, blue gum or white ironbark, is a species of small to medium-sized tree that is endemic to south-eastern continental Australia. It has smooth yellowish bark with some rough bark near the base, lance-shaped or curved adult leaves, flower buds in groups of three and cylindrical, barrel-shaped or shortened spherical fruit. A widely cultivated species, it has white, red or pink flowers. 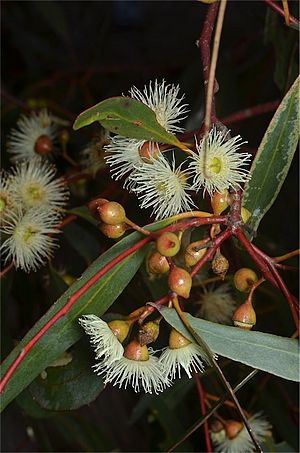 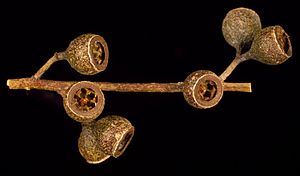 This species is similar to E. melliodora and E. sideroxylon subsp. sideroxylon but differs in having three buds in each group of flowers.

Eucalyptus leucoxylon was first formally described in 1855 by Ferdinand von Mueller in the Transactions and Proceedings of the Victorian Institure for the Advancement of Science. The specific epithet (leucoxylon) is derived from the ancient Greek leuco- meaning "white" and -xylon meaning "wood".

The subspecies and varieties accepted by the Australian Plant Census (APC) as at September 2019 are:

This eucalypt species is found in Victoria, south-eastern South Australia and far south-western New South Wales. All six subspecies occur in Victoria. Subspecies bellarinensis is only known from the Bellarine Peninsula near Ocean Grove and Torquay. Subspecies connata grows on skeletal soils, mostly in the Brisbane Ranges. Subspecies leucoxylon is the most widespread species and occurs in scattered populations across Victoria and in south-eastern South Australia, including on Kangaroo Island where the tallest specimens are found. Subspecies megalocarpa is a stunted tree or mallee only found in coastal areas from the far south-east of South Australia to far western Victoria. Subspecies pruinosa occurs in drier areas of South Australia, the Wimmera and Goldfields of Victoria and on the Murray River floodplain near Barham in New South Wales.

The leaves are distilled for the production of cineole based eucalyptus oil.

Subspecies megalocarpa is a relatively small tree with red flowers and large fruit is often available under the horticultural name, ‘Rosea’. It flowers profusely in winter is widely planted as an ornamental plant. 'Euky Dwarf' is grown as a street and garden tree, growing to a height of 5–6 m (16–20 ft) tall and 3–4 m (9.8–13.1 ft) wide. Subspecies leucoxylon has been recommended for larger gardens and parklands. A variety known as Euky Dwarf is very popular as a street and garden tree, growing around 5-6m in height.

All content from Kiddle encyclopedia articles (including the article images and facts) can be freely used under Attribution-ShareAlike license, unless stated otherwise. Cite this article:
Yellow gum Facts for Kids. Kiddle Encyclopedia.