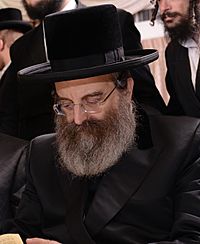 Rabbi Yisrael Moshe Friedman (23 July 1955 – 10 August 2020) was an American-Israeli rabbi. He was the sixth Rebbe of the Sadigura chasidus. He led his court from Bnei Brak, Israel. He was the sixth rebbe between 2013 until his death. He was born in New York City.

All content from Kiddle encyclopedia articles (including the article images and facts) can be freely used under Attribution-ShareAlike license, unless stated otherwise. Cite this article:
Yisrael Moshe Friedman Facts for Kids. Kiddle Encyclopedia.