York Redoubt is a redoubt situated on a bluff overlooking the entrance to Halifax Harbour at Ferguson's Cove, Nova Scotia, Canada, originally constructed in 1793. It was designated a National Historic Site of Canada in 1962. 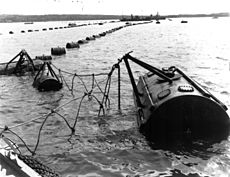 York Redoubt was a key element in the defence of Halifax Harbour in the 19th and 20th centuries, and saw many additions to its fortifications. It was a command centre for the local harbour defences in World War II, which included observation posts, a defensive minefield and a new gun battery below the fort at Sleepy Cove covering the anti-submarine net which stretched across the harbour's entrance from Fort McNab on McNabs Island. York Redoubt remained in military use until 1956.

Buildings in the redoubt complex include what remains of the Duke of York's Martello tower, built in 1798; other fortifications from around 1800 and 1900; and advanced fortifications and artillery from World War II. York Redoubt has many examples of rifled muzzle loader cannon from the 1870s period. An open-air collection of unmounted cannon within the fort has several pieces of artillery of various periods, including a large 9.62-inch breech loader that had been mounted at the Sandwich Point battery, part of the York Redoubt complex. 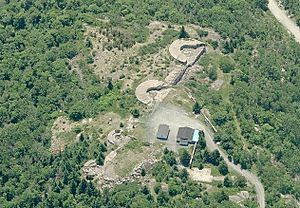 The series of four gun emplacements was constructed during World War I one kilometre away from the main fort at York Redoubt to protect the approaches to Halifax Harbour. During World War II the two dated 9.2-inch breech-loading guns were removed, but the two 6-inch breech-loaders were retained throughout the war. The battery is currently derelict and completely contained within Department of National Defence fenced land (home to Canadian Forces Naval Engineering School) and is strictly off limits to the public (gates restrict road access to Gas Lane via Fire and Smoke Roads from John Bracken Drive).

All content from Kiddle encyclopedia articles (including the article images and facts) can be freely used under Attribution-ShareAlike license, unless stated otherwise. Cite this article:
York Redoubt Facts for Kids. Kiddle Encyclopedia.