You Are The Ref facts for kids 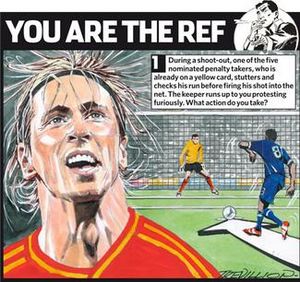 A You Are The Ref cartoon showing an incident in a penalty shootout. Fernando Torres is the chosen portrait.

You Are The Ref is a British comic strip which has run in various publications since 1957, featuring a series of improbable hypothetical football scenarios that then invites the reader to make the refereeing decision. Created by sports artist Paul Trevillion, also famous for Roy of the Rovers, the strip features contributions from several top referees, and was collected into an official book in 2006. From 2006 to 2016 it featured online on theguardian.com. and in The Observer newspaper.

When the strip moved to Shoot in 1969, leading referee Stan Lover, head of the London referees' association, was taken on to provide the answers to the questions You Are The Ref posed each week. In subsequent years, Lover was replaced by Clive Thomas, and then by Keith Hackett, who provided the answers in The Observer strips.

You Are The Umpire

A cricketing equivalent, You Are The Umpire, also drawn by Trevillion, took You Are The Ref's place in The Observer during football off-seasons from 2007 to 2016. Umpire John Holder provided the expert answers.

All content from Kiddle encyclopedia articles (including the article images and facts) can be freely used under Attribution-ShareAlike license, unless stated otherwise. Cite this article:
You Are The Ref Facts for Kids. Kiddle Encyclopedia.