Yucca filamentosa, Adam’s needle and thread, is a species of flowering plant in the family Asparagaceae native to the southeastern United States. Growing to 3 m (10 ft) tall, it is an evergreen shrub valued in horticulture for its architectural qualities.

Y. filamentosa is closely related to Yucca flaccida and it is possible they should be classified as a single species. 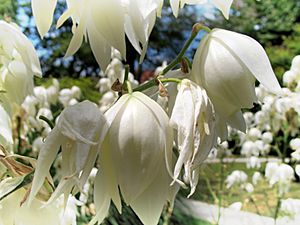 Usually trunkless, it is multisuckering with heads of 75 cm (30 in) long, filamentous, blue-green, strappy leaves. Y. filamentosa is readily distinguished from other yucca species by white, thready filaments along the leaf margins. Flower stems up to 3 m (10 ft) tall bear masses of pendulous cream flowers in early summer. They are pollinated by the yucca moth Tegeticula yuccasella. Other moth species, such as Tegeticula intermedia, also use this yucca as a host plant to lay their eggs.

Yucca filamentosa is found from southeast Virginia south to Florida, and as far west as south and southeast Texas. It has become naturalized along the Atlantic coastal plain north to Long Island Sound and into areas of the lower Midwest. It is reportedly also naturalized in France, Italy and Turkey.

This plant is most commonly found in sandy soils, especially in beach scrub and dunes, but also in fields, barrens, and rocky slopes, though it grows well also in silt or clay soils.

Y. filamentosa is widely cultivated in mild temperate and subtropical climates. A fairly compact species, it nevertheless presents a striking appearance with its sword-like leaves and dramatic flowerheads. It is naturally a focal point in the landscape, also providing a tropical touch in temperate gardens. It needs full sun and a well-drained soil, preferring an acid or slightly alkaline pH range of 5.5 to 7.5. It develops a large, fleshy, white taproot with deep lateral roots. Once planted and established, it is difficult to remove, as the roots keep sending up new shoots for many years. It is normally hardy down to −29 °C (−20 °F) (USDA hardiness zones of 5 to 9: UK H7).

'Bright Edge', a dwarf cultivar with yellow-margined foliage and creamy flowers tinged with green, has gained the Royal Horticultural Society's Award of Garden Merit. ‘Color Guard’, with broad yellow stripes all year plus red stripes in the winter, has also won the award.

Once the seeds have been removed, the fruits can be cooked and eaten. The large flower petals can also be eaten in salads.

The leaves, stems and roots of this plant can be used to stun fish. The Cherokee used it for this purpose.

All content from Kiddle encyclopedia articles (including the article images and facts) can be freely used under Attribution-ShareAlike license, unless stated otherwise. Cite this article:
Yucca filamentosa Facts for Kids. Kiddle Encyclopedia.