The Zig Zag Railway is an Australian heritage railway, situated near Lithgow, New South Wales. It was opened by the not-for-profit Zig Zag Railway Co-op as an unpaid volunteer-staffed heritage railway in October 1975, using the alignment of the Lithgow Zig Zag line that formed part of the Main Western line between 1869 and 1910. The line climbs the western flank of the Blue Mountains, using railway zig zags to gain height.

Operation of the heritage railway was suspended in 2012 following accreditation issues with the Government of New South Wales. The railway was aiming to resume services in October 2013, but was then severely damaged during the 2013 NSW Bushfires and then subsequently by torrential rain. Repairs are ongoing and trials of restored rail vehicles and track commenced in August 2016 and it was planned to re-commence limited heritage operations in 2019, until the 2019-2020 bushfires damaged key infrastructure. The COVID-19 pandemic further delayed restoration and plans are now providing for resumption of heritage train services in mid-2022. 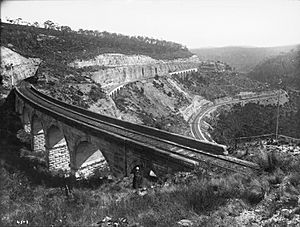 A historical view of the Zig Zag Railway line with Top Road and number 1 viaduct in the foreground, Middle Road and viaducts numbers 2 & 3, and Bottom Road still part of the Main Western line to the right
Main page: Lithgow Zig Zag

The Lithgow Zig Zag line was constructed as part of the Main Western line and opened on the 19 October 1869. Between Lithgow and Clarence, the Main Western line needed to climb the western flank of the Blue Mountains, overcoming a vertical distance of 550 ft (170 m). The alternative eventually decided upon required the use of two railway zig zags known as Top Points and Bottom Points, where all trains had to reverse. The line had a ruling grade of 1:42 (~2.38%) on three inclines known as the Top Road (above Top Points), Middle Road (between the two zig zags) and Bottom Road (below Bottom Points). The line included several short tunnels and some viaducts.

The steep gradients and need to reverse trains proved to be a serious bottleneck to traffic on the line, and there were several accidents with runaway trains at the reversing points. Attempts were made to mitigate this by realigning the track and relocating and extending the reversing stations, but the problems continued. As early as 1885 plans for alleviating the Zig Zag problem involved the construction of a 2 mi (3.2 km) long tunnel. This was said to provide little gain for the cost proposed. In 1908, work began on the Ten-Tunnels Deviation, a double tracked route that by-passed the two reversing stations and the upper two inclines, although retaining the Bottom Road with its 1:42 gradient. Once this was completed, the by-passed section was closed in October 1910. 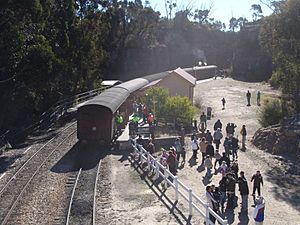 As the end of steam operation in New South Wales approached, in 1967 a group of steam enthusiasts headed by Ian Thornton were keen to establish an operating steam museum. The Lithgow Zig Zag was chosen as a suitable site based on its accessibility by day-trippers from Sydney, its scenery, abundant water supplies and availability of coal. In March 1969 negotiations commenced with the Zig Zag Trust, the Department of Lands and the Lithgow City Council.

In 1972 the Lithgow Switchback Railway Co-op Limited was born and this became the Zig Zag Railway Co-operative Limited in 1974. At this time, the Commissioner for Railways only made heritage locomotives and rolling stock available to the officially sponsored New South Wales Rail Transport Museum. Thus the line was relaid to 1,067 mm (3 ft 6 in) narrow gauge as used in Queensland, South Australia and Tasmania rather than the New South Wales 1,435 mm (4 ft 8 1⁄2 in) to allow locomotives and carriages to be procured from these states.

In 1975 the new track was complete on the Middle Road between Bottom Points and Top Points. On 29 August 1975 1046 operated the first journey from Bottom Points to Top Points. Services commenced on 18 October 1975, the 106th anniversary of the original opening.

On 4 April 1987 the line was opened along the Top Road between Top Points and Mt Sinai Halt and on 29 October 1988 through to Clarence. A further extension to meet the Main Western line at Newnes Junction has been started with track laid for 50% of the distance.

In August 2006 the Independent Transport Safety Regulator (ITSR), an agency of the Government of New South Wales that regulates safety and accredits railway operators, identified the Zig Zag Railway (and one other operator) as a "higher risk" isolated line operator because of its complex operations and high numbers of passenger trips. The ITSR gave Zig Zag Co-operative additional time to develop a safety improvement plan in order to comply with the Act, that took effect for all heritage railway operators from 1 January 2007.

On 1 April 2011 an incident occurred resulting in a collision between a maintenance vehicle and a two-car rail motor, between Clarence and Top Points stations. Travelling in opposite directions and carrying one passenger (in the Hy-rail) plus one driver of each rail vehicle, two injuries were sustained and the collision caused a minor misalignment of the track. A subsequent investigation by the Office of Transport Safety Investigations found that the principal error was miscommunication. The inquiry also identified that a number of other factors were found to have contributed to the collision, particularly a lack of radio communications; operational safe working errors; the delayed notification of the accident; poor maintenance of registers; passengers travelling in the driver's cab; fatigue; and excess speed.

From March 2012 only railcars could be operated and in June 2012 the ITSR ordered a cessation of all services until a number of safety issues were addressed. The railway was then aiming to resume services in October 2013.

The Railway was severely damaged by the 'State Mine Fire', part of the October 2013 bushfires. The Railway suffered millions of dollars of damage which included ten passenger carriages, four accommodation carriages, a nearly completed shower block and meal room destroyed and a spare parts centre and the machine shop and workshop badly damaged. Electrical equipment to operate signals was totally destroyed as was the repeater tower for the safety radio communication system and the internal telephone lines and exchange. One thousand new railway sleepers were also lost as was the caretaker's converted accommodation carriage. The caretaker was "lucky to escape with her life" according to the Zig Zag's then CEO Michael Forbes. Much of the damage was suffered by original railway equipment from the 1920s. At that time it was estimated that the railway would take a full year to recover from the State Mine Fire. Heavy rain then caused subsequent damage to an embankment near the western end of the Clarence tunnel and to the loop track at Bottom Points. As at October 2016 restoration of vehicles and infrastructure is still being undertaken and hopes are for recommencement of services in early 2017.

Prior to the suspension of services in 2012, the Zig Zag Railways was unique in New South Wales being the only heritage operator to run every day except Christmas Day. On Mondays, Tuesdays, Thursdays, Fridays and Sundays railmotors were operated. Every Wednesday, Saturday and Sunday a steam loco with train would operate with Sunday having a two train timetable. Special events included a Day Out with Thomas and a Wizards Express event held a couple of times per year. During most school holidays steam services ran every day. Passengers could join the service at Bottom Points where Zig Zag railway station is served by NSW TrainLink services from Sydney or at Clarence which is adjacent to the Chifley Road/Bells Line of Road.

The locomotives and rollingstock on the Zig Zag Railway have been mainly sourced from Queensland Railways but there are also items from the South Australian Railways and TasRail. 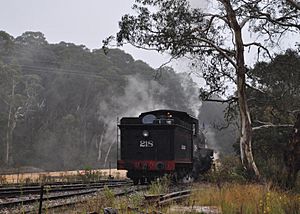 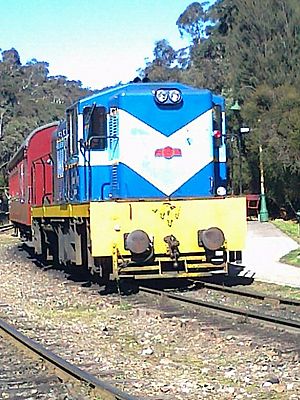 During the early 1970s four ex-NSWR sleeping cars were located at the Bottom Points of the Zig Zag to provide stationary sleeping accommodation, meal and ablution facilities for its volunteer train crews and workers.

Zig Zag Railway has a variety of four-wheeled and eight-wheeled freight, fire fighting, and works vehicles. These include fuel and water tank cars, hopper wagons, flat wagons and covered and louvered vans. These vehicles have been sourced from NSW, Queensland, South Australia, Northern Territory, and Tasmania. It also had one HiRail vehicle (Can operate on road or rail)

In 2003 the railway was used in the production of the Hollywood film Stealth. The area stood in for mountainous regions in North Korea and locomotives were specially painted with Korean Chosongul (Hangul) characters.

All content from Kiddle encyclopedia articles (including the article images and facts) can be freely used under Attribution-ShareAlike license, unless stated otherwise. Cite this article:
Zig Zag Railway Facts for Kids. Kiddle Encyclopedia.