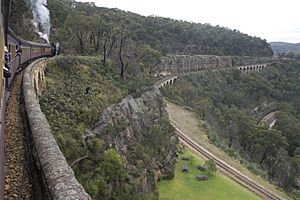 A View of the Zig Zag railway

The Lithgow Zig Zag is a heritage-listed former zig zag railway line built near Lithgow on the Great Western Line of New South Wales in Australia. The zig zag line operated between 1869 and 1910, to overcome an otherwise insurmountable climb and descent on the western side of the Blue Mountains. It was designed by John Whitton and built from 1863 to 1869 by Patrick Higgins as contractor. It is also known as the Great Zig Zag Railway and Reserves and Zig Zag Railway. The property is owned by Department of Planning and Infrastructure (State Government). It was added to the New South Wales State Heritage Register on 2 April 1999.

Part of the railway line is now used by the Zig Zag Railway, a narrow gauge tourist railway.

The original plan by the Engineer-in-Charge of New South Wales Government Railways, John Whitton, had been to build a 2-mile (3.2 km) tunnel. However, this was beyond the resources of the Colonial Government at the time. The zig zag alternative still required several short tunnels and some viaducts. After consideration of several alternate routes the Great Western Railway was extended along the high ridge of the Darling Causeway from Mount Victoria. The descent to the Lithgow Valley was originally proposed by means of a tunnel. In 1866 the tunnel was estimated to be about two miles in length and a figure of $800,000 was set down as the cost of its construction. However, due to the enormous cost, construction time and, as John Whitton, Engineer-in-Chief of the NSW Railways reported at the time, it would have been difficult to get a contractor to undertake such difficult work. As a result, John Whitton selected the zig zag method of ascent and descent.

By contrast, the Lithgow Zig Zag railway, built between 1866 and 1869, required much heavier engineering, including four large rock cuttings, three fine stone viaducts with 30-foot (9.1 m) semi-circular arches (originally four were planned, but one was built as an embankment instead) and a short tunnel (three tunnels were planned, but two were daylighted during construction due to leaks, becoming two of the four cuttings mentioned above). In the descent of the middle road, the line dropped 101 feet (31 m) between the reversing points, being part of the 550 feet (170 m) descent from Clarence. The whole route had a ruling grade of 1:42 (~2.38%).

John Whitton and his work have been underrated in Australian history, although they provided the operational foundation of the main railway lines in New South Wales. In international references Whitton is recognised as one of approximately twenty of the greatest railway civil engineers in the first century of world railway construction. The achievement of his crossings of the Great Divide was superlative at the time and in terms of British railway civil engineering was only exceeded by the difficult crossing of the Indian Ghats.

The contract to build the Great Zig Zag was awarded to Mr Patrick Higgins in May 1866. It was for the Clarence to Wallerawang section of railway which consisted of seven stone viaducts, varying in height from 3.0 to 21.3 metres (10 to 70 ft), three tunnels and nearly one and a quarter million cubic yards of excavations, two-thirds through rock.

George McGarvie Donald of Lithgow was a master stonemason and builder who helped create the city of Lithgow. Born in Paddington in 1846, he was son of a Scottish stonemason, George Donald, senior. George senior had been encouraged to migrate to New South Wales by Governor Macquarie who wished him to assist with government building works. George junior did an apprenticeship as a stonemason under his father and uncle. After this he was engaged on railway construction projects in the Bowenfels district in the late 1860s. He worked on stone railway bridges at the Great Zig Zag and Marrangaroo, and married Marion Miles, daughter of one of the construction foremen. Following completion of the railway he moved to Hill End and worked on a range of construction projects. Among these was Hill End Methodist church, built of basalt rubble from the gold mines. It is now used as an Anglican church. After the failure of the deep lead gold boom of the 1870s George returned to the Lithgow valley and established a construction business with Thomas Crowe. In the early 1880s he constructed St.Mary's Presbyterian church for Thomas Brown, built as a memorial to Brown's wife, Mary. He also built Cooerwull Academy for Brown, and the Church of St. John the Evangelist at Wallerawang. Other projects included Lithgow Town Hall, Wallerawang Public School the Lithgow Oddfellows Hall and many residences. Donald and Crowe also built Mort's freezing works. George Donald was extremely active in community affairs and had a great sense of social justice. He was founding member of the GUIOOF Lily of the Valley Lodge and the Good Templars Lodge. Popular among citizens he was elected the first mayor of Lithgow after establishment of the Municipality of Lithgow in 1889. He held the seat of Hartley in the NSW Legislative Assembly jointly with Joseph Cook from 1891.

On 19 October 1869 the first official train ran across the Lithgow Zig Zag to Bowenfels railway station, completing the route over the Blue Mountains. This event was heralded worldwide as an engineering marvel resulting in many organised sight-seeing parties from overseas to view it. According to NSW Planning Department documents, in international references, John Whitton is recognised as one of approximately twenty of the greatest railway civil engineers in the first century of world railway construction. The achievement of his crossings of the Great Divide was superlative at the time and in terms of British railway civil engineering was only exceeded by the difficult crossing of the Indian Ghats.

Between 1869 and 1910 the railway was a major force in the development of western New South Wales. Eventually traffic became so dense, due to the growth of the railway system through the spread of settlement, together with the loss of time in working over the Great Zig Zag, that alternatives were considered. From the 1880s many inquiries and investigations were held including consideration of John Whitton's original proposal for a two-mile tunnel.

The Lithgow Zig Zag operated between 1869 and 1910. By then it had become an increasingly inefficient bottleneck owing to the growing traffic on the line between Lithgow and Sydney. The Top Points were also too short.

Two major accidents occurred in 1901, in January a carriage was backed through the top wing buffer stops and in April a goods engine burst through the buffer stops located at the top "wing" and almost fell into the valley below.

To alleviate the congestion, until a new deviation opened, the "top" and "bottom" wings were improved. The "top" wing was abandoned and a new line constructed which involved a sharp curve, heavy rock excavations and earth fillings to a depth of 60 feet (18 m). The "bottom" wing was lengthened without any re-location. However, accidents still continued to occur, as was seen on 8 December 1908 when a Sydney bound goods train stalled just beyond Clarence Tunnel. The train was divided into two but the bottom portion accidentally became a runaway and eventually crashed into the rock cutting of Top Points.

There were plans to replace the section of 1 in 42 from Lithgow to Bottom points with a second horseshoe curve-like longer deviation, or with a spiral, but as this section in the open air could be operated with bank engines, this second stage deviation was never carried out.

In 1908, work began on the Ten Tunnels Deviation, a double tracked route with a ruling grade of 1:42 as far as the start of the ten tunnels and 1 in 90 through the ten tunnels. The Lithgow Zig Zag was eventually abandoned in 1910, replaced by the Ten-Tunnels Deviation which is still in heavy use as the Main West line to the central-west of NSW and ultimately the trans-Australia line between Sydney and Perth. On 16 October 1910 the new deviation was opened for traffic and the Great Zig Zag closed.

During World War II, the Clarence Tunnel on the Lithgow Zig Zag (along with other tunnels on various lines) were used to store chemical weapons for the Royal Australian Air Force. Principally mustard gas and phosgene, the chemical agents were housed in a variety of weapons from bombs to cylinders. The cache was disposed of after the war.

In 1972 a cooperative formed to re-use the line using rolling stock sourced from inter-state. In 1975 the line re-opened as a tourist attraction, operating between Top and Bottom Points. The re-development extended to Mt Sinai halt in 1987 and on to Clarence in 1988.

It has an Institute of Engineers (Australia) National Engineering Landmark plaque.

As at 30 September 1997, The Great Zig Zag Railway had a profound influence upon the development and economy of western New South Wales. At the time it was the greatest civil engineering work in Australia and was considered worldwide as an engineering marvel. It reflects the difficulty experienced in crossing the Blue Mountains and engineering compromises enforced by economics. The reserve is a fine scenic attraction and the sandstone escarpments and viaducts provide a dramatic juxtaposition to the urban development of nearby Lithgow.

Lithgow Zig Zag was listed on the New South Wales State Heritage Register on 2 April 1999 having satisfied the following criteria.

The reserve is a fine scenic attraction in itself, offering superb views of the rugged sandstone valleys and escarpments leading to the western plains. It serves to provide a dramatic juxtaposition to the urban development of nearby Lithgow suburbs. The three main viaducts are particularly pleasing structures.

It reflects the difficulty experienced in crossing the Blue Mountains and engineering compromises enforced by economics.

At the time of building the Great Zig Zag Railway was regarded as the greatest civil engineering work in Australia at that time and attracted worldwide interest as an engineering marvel.

All content from Kiddle encyclopedia articles (including the article images and facts) can be freely used under Attribution-ShareAlike license, unless stated otherwise. Cite this article:
Lithgow Zig Zag Facts for Kids. Kiddle Encyclopedia.