The Éternité River (French: Rivière Éternité, meaning Eternity River) is a small stream in Quebec, Canada, which flows into Eternity Bay at Rivière-Éternité, in the Le Fjord-du-Saguenay Regional County Municipality, in the administrative region of Saguenay–Lac-Saint-Jean.

The upper part of this river crosses the zec du Lac-au-Sable, a controlled exploitation zone; the lower part crosses the Saguenay Fjord National Park, a protected natural area which is very popular with tourists.

The Éternité river is mainly served by the route 170 (east-west direction) which passes through the village of Rivière-Éternité. Some other secondary forest roads serve the lake sector for forestry and recreational tourism activities.

Forestry is the main economic activity in the sector; recreational tourism, second.

The surface of the Eternity River is usually frozen from the end of November to the beginning of April, however the safe circulation on the ice is generally done from mid-December to the end of March.

The Eternity River rises at Éternity Lake (navigable length: 9.0 km (5.6 mi); altitude: 250 m (820 ft)) which straddles the townships "de Brébeuf" and "de Hébert". The northeast part of the lake has the shape of a giraffe neck and head looking towards the southeast; the South-West part has the shape of a cross whose top is oriented towards the South-East. The two parts of the lake are connected opposite the outlet of Lake Bailloquet. This lake is surrounded by mountains. The mouth of Éternité Lake is located at:

The course of the Eternity River generally flows northeast on 19.8 km (12.3 mi) according to the following segments: 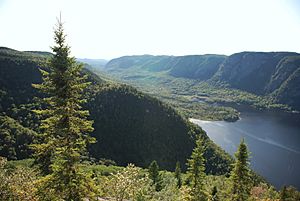 The mouth of the Eternity River is located at:

From the mouth of the Éternité river, the current crosses the Baie Éternité on 3.0 km (1.9 mi) north, then descends the Saguenay River on 65.4 km (40.6 mi) to the east where flows into the St. Lawrence River at Tadoussac.

The Commission de toponymie du Québec wrote about it: "a map of Jacques-Nicolas Bellin, from 1744, designates the river by the Amerindian name Heregachitgs, which translates as the Trinity. Captain Louis Sivrac mentions the toponym Ance d'Éternité, in 1824. A map produced in 1825 by Pascal Taché identified the river which ends at the bottom of the bay: "Rve de l'Étrinité" (sic)."

It continues: "The Éternité river is a small fish-filled stream that descends from the Laurentian mountains for almost 20 km, to discharge Lac Éternité, a narrow body of water, which forms an L stretched over 9 km long. Forest sites were exploited along this river, in the current municipality of Rivière-Éternité, at the end of the XIXe century · ."

According to the Sépaq, the Eternity river is an important river for the reproduction of the brook trout anadrome, commonly called sea trout.

All content from Kiddle encyclopedia articles (including the article images and facts) can be freely used under Attribution-ShareAlike license, unless stated otherwise. Cite this article:
Éternité River Facts for Kids. Kiddle Encyclopedia.