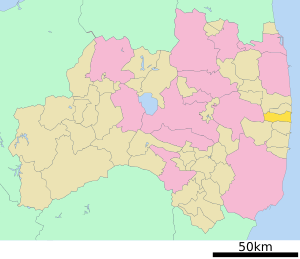 Location of Okuma in Fukushima prefecture

Ōkuma (大熊町code: ja is deprecated , Ōkuma-machi) is a Japanese town in Fukushima Prefecture on the island of Honshu.

The Fukushima Daiichi Nuclear Power Plant was built in Okuma.

The area was evacuated because of the Fukushima nuclear disaster in 2011.

According to the New York Times in 2013, the people of Ōkuma, like many other communities in Fukushima, are "starting to come to terms with a sobering realization: their old homes are probably lost forever, and they must start anew elsewhere."

The people who used to live in Ōkuma are called "nuclear refugees".

There are three towns, one village, one city, and one district next to Ōkuma.

A sister city relationship was established with Bathurst, New South Wales in Australia.

All content from Kiddle encyclopedia articles (including the article images and facts) can be freely used under Attribution-ShareAlike license, unless stated otherwise. Cite this article:
Ōkuma, Fukushima Facts for Kids. Kiddle Encyclopedia.