125 West 55th Street, also known as Avenue of the Americas Plaza, is a 23-story, 575,000-square-foot (53,400 m2) office building located on 55th Street between the Avenue of the Americas (Sixth Avenue) and Seventh Avenue in Midtown Manhattan, New York City. The building also has an entrance at 120 West 56th Street, across the street from the Le Parker Meridien Hotel. 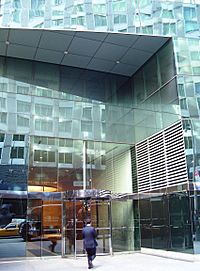 The building had a cost of $60 million in 1988 dollars. The Saint Thomas Choir School previously occupied the site, before the construction of the skyscraper. The choir school moved into a new building as the previous one was replaced. Fisher Brothers constructed the building.

Construction on 125 West 55th Street began in 1988. In order to capitalize on a City of New York zoning bonus, the developers planned to have the building's foundation installed by May 13, 1988; buildings in the area installed before a deadline in the northern hemisphere spring of 1988 received a 20% increase in size in order to spur development of western Midtown Manhattan. The developers planned to have tenants begin occupying the building in May 1989. The building was completed in 1990.

In 1991 Air France leased 29,500 square feet (2,740 m2) of space in the building, including 27,000 square feet (2,500 m2) of office space on the building's second floor and 2,500 square feet (230 m2) of retail space on the first floor. Air France, which had its previous ticket office at 666 Fifth Avenue and its previous reservation department at 888 Seventh Avenue, wanted a larger ticket office facility and overhauled reservation department offices, so it moved both departments into 125 West 55th Street. Air France opted to move into 125 West 55th Street instead of spending $2.5 million to upgrade the telecommunications systems and remove asbestos at 888 Seventh Avenue; 125 West 55th Street came with the latest fiber optics systems and did not have asbestos. Air France has since closed the street-level retail ticket office. 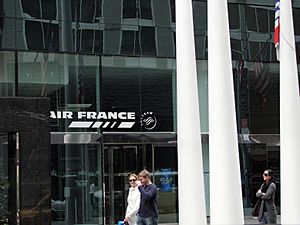 The 120 West 56th Street entrance in 2009, indicating an Air France ticket office that was there, but is no longer

Beginning in 1992, the airline planned to move its Northeast United States headquarters, its U.S. reservation center, and its New York City ticket office to the building. Around that time Katz Communications signed a lease for 170,000 square feet (16,000 m2) of space in the building. As of July 10, 1991, it was the largest lease in Manhattan in the year 1991. As of November 24 of that year, the Katz lease was the fourth largest lease in New York City in 1991. During that year the National Bank of Canada and Credietbank were tenants in the building.

In the summer of 1992, LeBoeuf, Lamb, Leiby & MacRae moved 1,200 employees into the building. The firm had consolidated from several previous locations, and occupied eight floors and the concourse level. The 20-year lease was for 224,000 square feet (20,800 m2) of space. The LeBouef deal, signed in 1991, was that year's second largest lease in New York City as of November 24, 1991.

Boston Properties acquired the building in 2008. The company spent $444 million to purchase the building. In 2010, Katz Media Group renewed its lease until 2027. This renewal gave over one third of the building to Katz. Katz. Since the lease renewal, Katz has about 200,000 square feet (19,000 m2) of space in the building. In 2010 MetLife refinanced a portion of the debt of the building. As of 2011 the building was worth $345 million. In 2011 a former deputy of Harry Macklowe, former head of the Macklowe Group, filed a lawsuit against Macklowe, saying that Macklowe did not share the proceeds of the sale of 125 West 55th Street.

Thomas L. Waite of The New York Times said in 1988, before the completion of the building, that the blue glass sheathing around it "may give it a pastoral sheen." Waite said that the design of 125 West 55th Street is similar to that of the Metropolitan Tower.

All content from Kiddle encyclopedia articles (including the article images and facts) can be freely used under Attribution-ShareAlike license, unless stated otherwise. Cite this article:
125 West 55th Street Facts for Kids. Kiddle Encyclopedia.