125th Street (formerly Manhattan Street) is a local station on the IRT Broadway–Seventh Avenue Line of the New York City Subway. Located at the intersection of 125th Street and Broadway, at the border of the Manhattanville and Morningside Heights neighborhoods of Manhattan, it is served by the 1 train at all times.

Built for the Interborough Rapid Transit Company (IRT), the 125th Street station was constructed as part of the city's first subway line, which was approved in 1900. Construction on the segment of the line that includes 125th Street started on June 18 of the same year. The station opened on October 27, 1904, as one of the original 28 stations of the New York City Subway. The station's platforms were lengthened in 1948, and the station was renovated in the 2000s.

The 125th Street station contains two side platforms and three tracks; the center track is not used in regular service. The station is the only one on the 2,174-foot-long (663 m) Manhattan Valley Viaduct, which carries the Broadway–Seventh Avenue Line across a natural valley surrounding 125th Street. The platforms contain windscreens and canopies. The station house beneath the platforms contains exits to 125th Street and Broadway. The Manhattan Valley Viaduct is a New York City designated landmark and listed on the National Register of Historic Places. 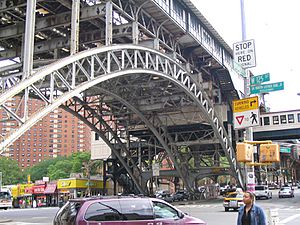 The station seen up close from Broadway

Planning for the city's first subway line dates to the Rapid Transit Act, authorized by the New York State Legislature in 1894. The subway plans were drawn up by a team of engineers led by William Barclay Parsons, chief engineer of the Rapid Transit Commission. It called for a subway line from New York City Hall in lower Manhattan to the Upper West Side, where two branches would lead north into the Bronx. A plan was formally adopted in 1897, and legal challenges were resolved near the end of 1899. The Rapid Transit Construction Company, organized by John B. McDonald and funded by August Belmont Jr., signed Contract 1 with the Rapid Transit Commission in February 1900, in which it would construct the subway and maintain a 50-year operating lease from the opening of the line. Belmont incorporated the Interborough Rapid Transit Company (IRT) in April 1902 to operate the subway.

The 125th Street station was constructed as part of the IRT's West Side Line (now the Broadway–Seventh Avenue Line). While most of the original line was designed to be underground, the topology of Manhattanville necessitated the construction of a viaduct between 122nd and 135th Streets. Work began on the viaduct over Manhattan Valley on June 1, 1901. Work on the stone piers and foundations for the viaduct was done by E. P. Roberts, while other work was done by Terry & Tench Construction Company. According to Tramway and Railway World magazine, the viaduct was built within two weeks. Because of delays in constructing the masonry abutment, a portion of the parabolic arch span was built first, followed by the rest of the viaduct. Normally, the side spans would have been built before the arch was constructed. The section of the West Side Line around this station was originally planned as a two-track line, but in early 1901, was changed to a three-track structure to allow trains to be stored in the center track. A third track was added directly north of 96th Street, immediately east of the originally planned two tracks. The 125th Street station opened on October 27, 1904, as the Manhattan Street station, one of the original 28 stations of the New York City Subway from City Hall to 145th Street on the West Side Branch. 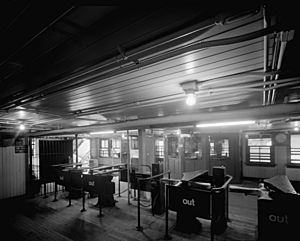 The station's entrance and turnstiles in 1978

After the initial system was completed in 1908, the station was served by West Side local and express trains. Express trains began at South Ferry in Manhattan or Atlantic Avenue in Brooklyn, and ended at 242nd Street in the Bronx. Local trains ran from City Hall to 242nd Street during rush hours, continuing south from City Hall to South Ferry at other times. In 1918, the Broadway–Seventh Avenue Line opened south of Times Square–42nd Street, thereby dividing the original line into an "H" system. Local trains were sent to South Ferry, while express trains used the new Clark Street Tunnel to Brooklyn.

In 1909, to address overcrowding, the New York Public Service Commission proposed lengthening platforms at stations along the original IRT subway. On January 18, 1910, a modification was made to Contracts 1 and 2 to lengthen station platforms to accommodate ten-car express and six-car local trains. In addition to $1.5 million (equivalent to $34.2 million in 2018) spent on platform lengthening, $500,000 (equivalent to $11,396,429 in 2018) was spent on building additional entrances and exits. It was anticipated that these improvements would increase capacity by 25 percent. The northbound platform at the Manhattan Street station was extended about 98 feet (30 m) to the south, while the southbound platform was not lengthened. On January 24, 1911, ten-car express trains began running on the West Side Line.

Four stairways at the station were relocated, two stairways were added, and two passageways in the mezzanine were widened during Fiscal Year 1915. The station was renamed 125th Street in 1921, following a request from the Harlem Board of Commerce. A new mezzanine opened at the station on September 26, 1931, with three new escalators and a new staircase to and from the street. The span of escalator service was extended from 1 a.m. to 2 a.m. on November 2, 1931.

Between 1946 and 1948, platforms on the IRT Broadway–Seventh Avenue Line from 103rd Street to 238th Street, including at 125th Street, were lengthened to 514 feet (157 m) to allow full ten-car express trains to stop. Previously, the station could accommodate six-car local trains, but ten-car trains could not open some of their doors. A contract for the platform extensions at 125th Street and five other stations on the line was awarded to the Rao Electrical Equipment Company and the Kaplan Electric Company in June 1946. The platform extensions at these stations were opened in stages. The platform extensions at 125th Street opened on June 11, 1948. Simultaneously, the IRT routes were given numbered designations with the introduction of "R-type" rolling stock. The first such fleet, the R12, was put into service in 1948. The Broadway/West Side route to 242nd Street became known as the 1. In 1959, all 1 trains became local.

The New York City Landmarks Preservation Commission designated the Manhattan Valley Viaduct, including the 125th Street station, as a city landmark in 1981. The New York City Planning Commission subsequently objected against the viaduct's designation, claiming that it would depress the neighborhood. The viaduct and station were added to the National Register of Historic Places in 1983. 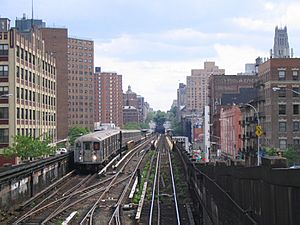 The tracks leading south to the station, which is visible behind (south of) the northbound 1 train

In June 2002, the Metropolitan Transportation Authority (MTA) announced that ten subway stations citywide, including 103rd Street, 110th Street, 116th Street, 125th Street, and 231st Street on the IRT Broadway–Seventh Avenue Line, would receive renovations. As part of the project, fare control areas would be redesigned, flooring, and electrical and communication systems would be upgraded, and new lighting, public address systems and stairways would be installed. In addition, since 110th Street, 116th Street, and 125th Street had landmark status, historical elements would be replaced or restored, including wall tiles. Work on the ten citywide renovation projects was estimated to cost almost $146 million, and was scheduled to start later that year, and be completed in April 2004, in time for the 100th anniversary of the station's opening, and the 250th anniversary of Columbia University.

Manhattan Community Board 9 was concerned about preserving the historic nature of the station during its renovation. Manhattan Community Board 7 got the MTA to agree to maintain the existing design of the wood paneling and windows in the station. The MTA was expected to decide whether preservation or speed would be prioritized in the station renovation projects by the end of the year. Columbia University provided funding to cover a portion of the cost of renovating the 125th Street station, as it did for the station renovations at 103rd Street, 110th Street, and 116th Street, and funded the substitution of the station's aluminum vents with glass windows to reflect the station's original design.

Between October 5 and November 17, 2003, the downtown platforms at 110th Street and 125th Street were closed to expedite work on their renovations. Skip-stop service ended on May 27, 2005.

This station was part of the original subway. It has two side platforms and three tracks; the center track is not used in revenue service. Both platforms have beige windscreens and red canopies. The windscreens have windows and green frames and outlines in the center that were installed in the station's 2003 renovation. On both ends of the platforms, which are not shaded by canopies, there are green, waist-high, ironwork fences. 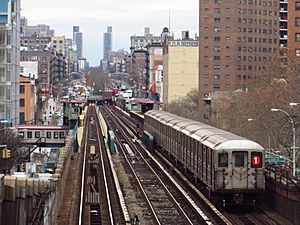 A northbound 1 train approaching the 125th Street station, as seen from the 122nd Street portal

The 125th Street station is the only station on the 2,174-foot-long (663 m) Manhattan Valley Viaduct, which bridges Manhattanville from 122nd to 135th Streets. The viaduct allows the trains to remain relatively level and avoid steep grades while traversing the valley. An elevated steel structure with simple steel supports, as used in other parts of the IRT, was not feasible because the oblique intersection of Broadway and 125th Street would have required an expensive realignment of 125th Street.

Architectural critic Montgomery Schuyler praised the IRT viaduct above 125th Street as "strictly an example of engineering, in which architectural conventions are not recognized at all". Aside from a complaint that the vertical supports of the arch carried an aesthetic "awkwardness", Schuyler wrote that "it is all the better architecturally" for having been designed for utilitarian purposes. Architectural writers Norval White and Elliot Willensky wrote in the AIA Guide to New York City that the arch was "worthy of Eiffel", a reference to the lattice of the Eiffel Tower. 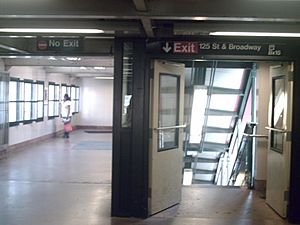 Staircase and passageway to escalator

This station has one elevated station house at the center of the platforms and tracks. Two staircases from each side go down to a waiting area/crossunder, where a turnstile bank provides access to and from the station. Outside fare control, on the west side of the station house, is a token booth and an enclosed passageway, which leads to two escalators going down to the west side of Broadway. The escalators go in opposite directions: one leads north to 125th Street while the other leads south to Tiemann Place. On the east side of the station house, another enclosed passageway leads to an escalator facing south and going down to the southeast corner of Broadway and 125th Street. Adjacent to this passageway is an "L" shaped staircase with its upper half directly above Broadway and the lower half beneath the enclosed escalator going to the same corner of the intersection. When the station opened, drawings show that there were escalators descending to the median of Broadway.