1501 Broadway, also known as the Paramount Building, is a 33-story, 391-foot (119 m) office building on Times Square between West 43rd and 44th Streets in the Theater District neighborhood of Manhattan, New York City. Completed in 1927, it once housed the Paramount Theatre. It was designated a New York City Landmark in 1988.

Paramount Pictures, one of the major American motion picture companies in the 1920s, built its headquarters at the 1501 Broadway location along with a cinematic theatre. Construction lasted between 1926 and 1927, costing $13.5 million. At the time of its completion, it was the tallest building in Times Square, and once sported an observation deck.

Paramount president Adolph Zukor had acquired a controlling interest in the Chicago-based Balaban and Katz theatre chain, and with it the services of Sam Katz, who became the head of Paramount's theatre division. Balaban and Katz had a long working relationship with the Chicago architectural firm Rapp and Rapp (C. W Rapp and George L. Rapp), which had designed numerous theaters for his company in the Midwest. They later hired the firm to design their new Manhattan flagship theater and office tower. The Rapp brothers created a thirty-three story office tower which was influenced by the Art Deco style, and a theatre in the palatial Neo-Renaissance style behind it.

With the spin-off of the theater units in 1950 as United Paramount Theatre, Inc. (UPT) the building became the UPT's headquarters being leased along with the theater from Paramount Pictures. The building continued as American Broadcasting-Paramount Theatres's headquarters after UPT's merger with ABC. The theater closed in 1964 under UPT ownership only to be reopened later that year under new ownership, while ABC moved to the ABC Building at 1330 Avenue of the Americas in 1965. The theater was dismantled in 1967.

Today, the Paramount Building is known for its large four-faced clock near the top of the pyramidal architectural feature, with the hours denoted by twelve five-pointed stars (forming a circle of stars as used in the Paramount Pictures logo), topped by an ornamental glass globe. At the outset of World War II, the globe and clock were painted black to maintain blackout conditions for fear of an enemy invasion; they were restored in 1996.

The ceilings were painted with a fresco and gilded, while the railings were manufactured from brass. There were Greek statues and busts carved in wall niches, while the restrooms and waiting rooms were grandiose in style in comparison to cathedrals at the time. The highlight of the decor was an enormous crystal chandelier in the main lobby. The theatre with 3,664 seats, was located at the rear of the building and served as the company's flagship venue where its major films would be premiered. 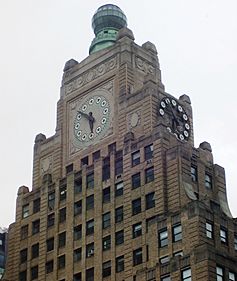 The top of the building, featuring the clock and globe, as seen from the west

The theatre entrance at the front of the Paramount Building is marked by a five-story arch on Broadway with an elaborate curved marquee, which was restored in 2007. A long gallery passed from there through the office building to reach the theatre itself, which occupied the rear of the building which extends through the middle of the block between 43rd and 44th streets. This structure included a long grand lobby along the south end which opened into the auditorium facing a stage at the north end. The lobby was modeled after the Paris Opera House with white marble columns, balustrades and an opening arms grand staircase. Within the auditorium, the drapes were colored in red velvet and the rugs were designed in a similar red. The interior of it was very high but somewhat shallow as necessitated by its allotted space. In addition, a large orchestra pit could be raised and lowered from the basement for theatric use.

On the morning of March 6, 2008, an unknown individual placed a small bomb in front of a United States Armed Forces recruiting station across Seventh Avenue from the building. There were no injuries. A security camera mounted at the building played a role in attempting to identify the assailant.

All content from Kiddle encyclopedia articles (including the article images and facts) can be freely used under Attribution-ShareAlike license, unless stated otherwise. Cite this article:
1501 Broadway Facts for Kids. Kiddle Encyclopedia.