The 1616 Walnut Street Building or 1616 Building is a historic high-rise building in the Center City area of Philadelphia, Pennsylvania.

In 1930, the architects received an award for the building's design at the 12th International Buildings Congress in Budapest.

Its five-story parking garage on the Chancellor Street side, part of the original construction, was considered a novelty in 1929.

In 2013, 1616 Walnut Street was renamed "Icon" as it underwent an extensive renovation, transforming it from commercial space to a luxury Class-A multifamily community expected to open in 2014.

It is now under AJH management, which has been leasing a select few of the empty rooms as "short-term leases" under Airbnb or Viagem. 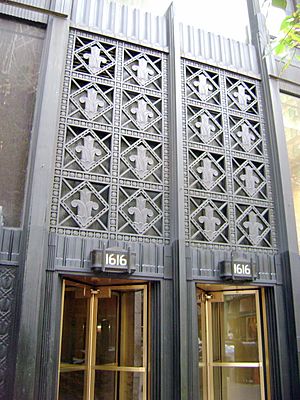 All content from Kiddle encyclopedia articles (including the article images and facts) can be freely used under Attribution-ShareAlike license, unless stated otherwise. Cite this article:
1616 Walnut Street Building Facts for Kids. Kiddle Encyclopedia.