Liberty Heights (also known as Wakefield Street Tower, or 17 New Wakefield Street) is a skyscraper apartment building in Manchester, England, west of Oxford Street. 17 New Wakefield Street was designed by local architect Stephen Hodder in a clustered architectural form and was completed in September 2012. The skyscraper is situated adjacent to Oxford Road railway station, on the corner of Great Marlborough Street. The skyscraper is 37 storeys high at a height of 109 metres and is the ninth tallest building in Manchester behind towers such as Deansgate Square's South Tower, the Beetham Tower and CIS Tower. 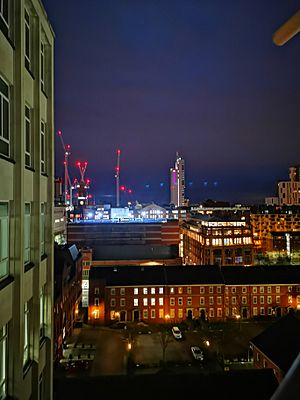 A planning application was made in early 2010, and planning consent granted in July 2010. Construction work began weeks after consent was granted. By November 2011, the tower had risen in height considerably, and on 18 April 2012, the tower had its topping out ceremony at a height of 109 metres.

Upon opening the building was named Student Castle, later renamed to Liberty Heights.

17 New Wakefield Street is a residential development of high rise flats aimed at young people and students. At 109m high it is the tallest, purpose built student accommodation in the world. It is the third tallest building in Manchester by roof height and the joint 43rd tallest nationally. Its apparent height is accentuated slightly by its position on a slope. The tower has some resemblance to the Mathematics Tower which also had a clustered exterior but was controversially demolished by the University of Manchester in 2005.

The project has 525 bedrooms in four stepped towers built on a foot area of 7,000 square feet. Plans for a residents' car park were rejected by planners concerned about the impact of a large building and busy location.

All content from Kiddle encyclopedia articles (including the article images and facts) can be freely used under Attribution-ShareAlike license, unless stated otherwise. Cite this article:
17 New Wakefield Street Facts for Kids. Kiddle Encyclopedia.