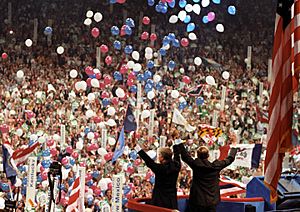 Carter and Mondale stand together at the end of the convention

The 1980 National Convention of the U.S. Democratic Party nominated President Jimmy Carter and Vice President Walter Mondale for reelection. The convention was held in Madison Square Garden in New York City from August 11 to August 14, 1980.

The 1980 convention was known as it was the last time in the 20th century, for either major party, that a candidate tried to get delegates released from their voting commitments. This was done by Senator Ted Kennedy, Carter's primary challenger for the nomination in the Democratic primaries.

All content from Kiddle encyclopedia articles (including the article images and facts) can be freely used under Attribution-ShareAlike license, unless stated otherwise. Cite this article:
1980 Democratic National Convention Facts for Kids. Kiddle Encyclopedia.