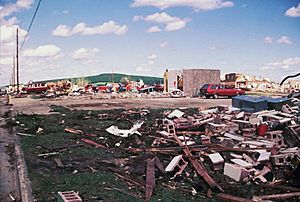 Damage as a result of the tornado.

Tornadoes began braking out on the afternoon of June 7 across North Dakota, Minnesota, Iowa, Kansas, and Missouri. Three people were killed in Missouri by a tornado and one person was killed in Iowa just after 9:00 p.m. CDT. The severe weather then shifted into Wisconsin where a tornado watch went out at 11:00 p.m. CDT, but most of Barneveld had gone to bed that night.

A supercell thunderstorm which produced a tornado in Iowa at 9:00 p.m. CT entered Wisconsin from the Iowa/Illinois border at midnight. At 12:30 a.m., the first tornado touched down in Lafayette County. At 12:41 a.m., the tornado drove through Barneveld. A sharp bolt of lightning as well as a loud clap of thunder cut the power to the city, awakening residents. Other tornadoes broke out before dissipating after 3:00 a.m. CDT.

The tornado was rated an F5 and killed 9 people and injured 200 others as well as $25 million in damage. It was the last F5 tornado to occur at night until the Birmingham, Alabama tornado in April 1998.

All content from Kiddle encyclopedia articles (including the article images and facts) can be freely used under Attribution-ShareAlike license, unless stated otherwise. Cite this article:
1984 Barneveld tornado Facts for Kids. Kiddle Encyclopedia.