The IA Tower was the result of a joint venture between the then Industrial Life Insurance Company and First Québec Corporation. Built on McGill College Avenue, the tower was designed to be a premium grade-A office building 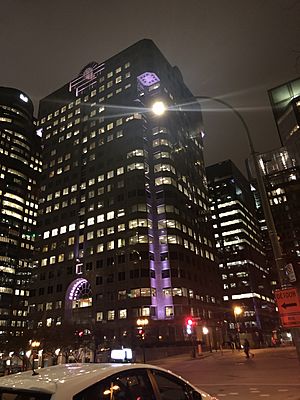 Designed by the Montreal firm Tolchinsky and Goodz, the IA Tower is made of Quebec polished granite. The building is larger at the last three floors and is designed to provide a maximum view of the Mont-Royal. Due to its conception, every floor apart from the three top floors has eight corner offices.

All content from Kiddle encyclopedia articles (including the article images and facts) can be freely used under Attribution-ShareAlike license, unless stated otherwise. Cite this article:
2000 McGill College Facts for Kids. Kiddle Encyclopedia.