The 2007 Gisborne earthquake occurred under the Pacific Ocean about 50 kilometres (31 mi) off the eastern coast of New Zealand's North Island at 8:55 pm NZDT on 20 December. The tremor had a moment magnitude of 6.7 and maximum Mercalli intensity of VIII (Severe), and affected the city of Gisborne, but was felt widely across the country from Auckland in the north to Dunedin in the south. 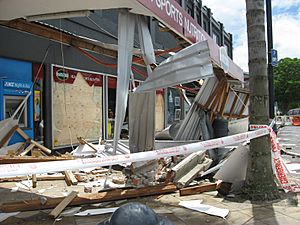 While the earthquake was initially reported to have caused no deaths, an elderly woman in Gisborne suffered a heart attack and died shortly after the quake. A number of buildings in central Gisborne were damaged. The central business district was closed off to allow building inspectors to assess buildings for damage; three buildings had collapsed. There were blackouts immediately after the earthquake hit. The town clock stopped at 8:55 pm. As of 14 January 2008, the Earthquake Commission had received over 3100 insurance claims amounting to $16 million. It was earlier estimated that the cost of damage caused by the earthquake could rise to $30 million.

All content from Kiddle encyclopedia articles (including the article images and facts) can be freely used under Attribution-ShareAlike license, unless stated otherwise. Cite this article:
2007 Gisborne earthquake Facts for Kids. Kiddle Encyclopedia.