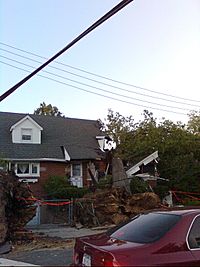 Damage to a home in Flushing caused by a fallen tree.

The 2010 Brooklyn/Queens tornadoes were a severe weather event that happened in the boroughs of Brooklyn and Queens in New York City. Two tornadoes touched down in Park Slope, Brooklyn and Flushing, Queens. It happened between 5:37 PM to 5:57 PM EDT on September 16, 2010. The tornadoes were the second to hit New York City that year, after a tornado that hit Queens on July 25. The stronger of the two tornadoes hit Flushing and was rated an EF1 with winds of up to 100 mph.

The thunderstorm hit New York City during the evening rush hour. It brought strong winds, heavy rain, and hail. The strong winds brought down over 30,000 trees and power lines. In addition to the tornadoes, a macroburst hit Middle Village and Forest Hills in Queens. The macroburst had heavy rain and strong winds of up to 125 mph.

All content from Kiddle encyclopedia articles (including the article images and facts) can be freely used under Attribution-ShareAlike license, unless stated otherwise. Cite this article:
2010 Brooklyn/Queens tornadoes Facts for Kids. Kiddle Encyclopedia.