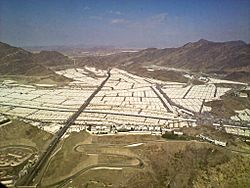 On 24 September 2015, a human stampede happened in the neighbourhood of Mina in Mecca, Saudi Arabia. At least 769 people were killed and another 934 were injured. 1,014 people are missing. The victims were mostly foreign Muslims in Mecca for the annual Hajj.

All content from Kiddle encyclopedia articles (including the article images and facts) can be freely used under Attribution-ShareAlike license, unless stated otherwise. Cite this article:
2015 Hajj stampede Facts for Kids. Kiddle Encyclopedia.