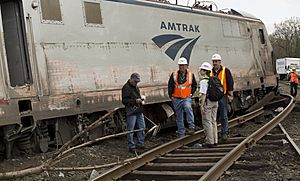 NTSB workers look at the train

Amtrak Northeast Regional No. 188 was on its way from Washington, D.C. to New York City. It derailed at 9:23 pm. The train went off the track. Some cars fell onto their sides.

The accident killed eight people and injured more than 200 people.

The Federal Bureau of Investigation (FBI) said that there were no signs which suggested that the derailment was related to terrorism. A team from the National Transportation Safety Board (NTSB) also investigated.

The driver of the train, Amtrak engineer Brandon Bostian, suffered wounds to the legs and head, including a concussion, and was said to be unable to remember the incident.

All content from Kiddle encyclopedia articles (including the article images and facts) can be freely used under Attribution-ShareAlike license, unless stated otherwise. Cite this article:
2015 Philadelphia train derailment Facts for Kids. Kiddle Encyclopedia.