Below is a table with the polling results in Oklahoma. Oklahoma has voted Republican in the general election since 1968. 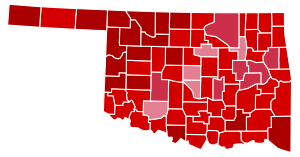 Hillary Clinton only received 28.9% of the statewide vote. This is the lowest number any Democratic candidate has received in Oklahoma since 1972, when George McGovern received only 24.0% of the vote.

Donald Trump won every county in the state. This is the fourth consecutive election in Oklahoma in which all counties voted for the Republican candidate. 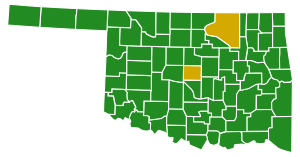 The Democratic primary occurred on March 1, 2016. 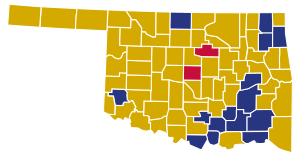 The Republican primary occurred on March 1, 2016.

All content from Kiddle encyclopedia articles (including the article images and facts) can be freely used under Attribution-ShareAlike license, unless stated otherwise. Cite this article:
2016 United States presidential election in Oklahoma Facts for Kids. Kiddle Encyclopedia.