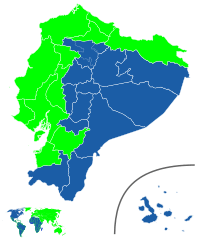 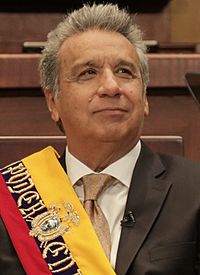 2017 general elections were held in Ecuador on 19 February 2017 alongside a referendum on tax havens.

Incumbent President Rafael Correa of the PAIS Alliance was not eligible for re-election, having served two terms. In the first round of the presidential elections, PAIS Alliance candidate Lenín Moreno received 39% of the vote. Although he was more than 10% ahead of his nearest rival, Guillermo Lasso of the Creating Opportunities party, Moreno was just short of the 40% threshold required to avoid a run-off.

As a result, a second round was held on 2 April. In the second round Moreno was elected president with 51.16% of the vote.

All content from Kiddle encyclopedia articles (including the article images and facts) can be freely used under Attribution-ShareAlike license, unless stated otherwise. Cite this article:
2017 Ecuadorian general election Facts for Kids. Kiddle Encyclopedia.