The 2019 UK Championship was a professional snooker tournament. It took place from 26 November to 8 December 2019. It was the 43rd UK Championship, and the seventh ranking tournament and the first Triple Crown event of the 2019–20 season. The event was shown on BBC Sport in the United Kingdom and on Eurosport in Europe. The tournament was sponsored by betting company Betway.

Ronnie O'Sullivan had won the 2018 event. O'Sullivan was beaten in the last 16 by Ding Junhui. Ding played Stephen Maguire in the final. Ding beat Maguire 10–6 to win his third UK championship. 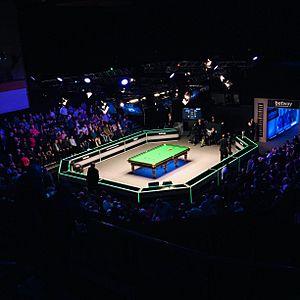 The arena inside the York Barbican during the event

The results of the event are shown below. The winners of each match are indicated in bold.

All content from Kiddle encyclopedia articles (including the article images and facts) can be freely used under Attribution-ShareAlike license, unless stated otherwise. Cite this article:
2019 UK Championship Facts for Kids. Kiddle Encyclopedia.